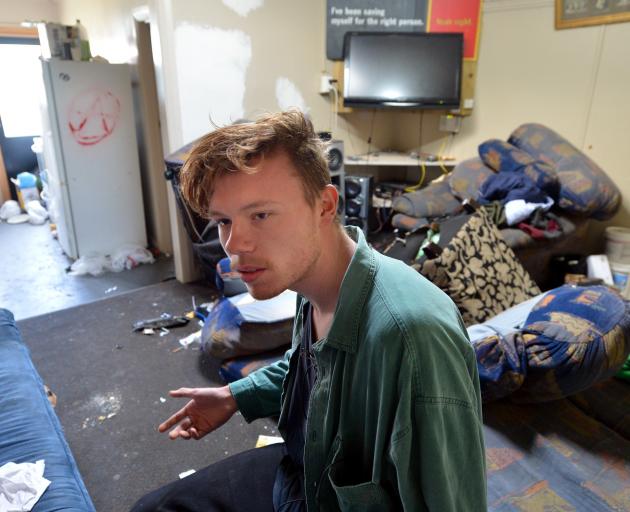 The University of Otago student, who did not want to be named, said he was ''terrified'' after arriving home about 1am yesterday to find furniture and rubbish strewn across his living room and bathroom, light fittings smashed and four unknown women in his flat.

''I was terrified. I asked them what they thought they were doing,'' he said.

''They just laughed and said 'you should lock your door'.''

Nothing was taken from the flat.

''I imagine if I hadn't walked in at that point, stuff would be gone.''

Two other residents were asleep at the time, he said.

The police arrived shortly after the incident.

The man's flatmate, Liam Gower (21), said the incident was the latest in a number of ''third world'' events, including fights, burglaries and threats on the street since a group of young people moved there in April.

Mr Gower wanted the people he believed were responsible for the behaviour to be evicted from their rental property.

''I'm sure the police are doing everything they can, but there have been multiple incidents. I want them out.''

Student Accommodation property manager Tasi Mala, whose tenants were blamed by other Hyde St residents for the crime spree, said he was not aware of significant issues with his tenants.

''As far as I'm aware it's not the kids who live there ... You have a few drinks and people you might not want to turn up to your parties turn up.''

Mr Mala did not know anything about Tuesday's incident.

''All I'm aware of is I've been contacted by noise control at random times of the day, not just night.''

He had spoken to his tenants about the noise incidents and would meet University of Otago proctor Dave Scott this week to discuss fights which had occurred on the street.

''The tenants have been nice as pie for me to deal with, so I can't comment on their behaviour until I know more,'' he said.

Acting Otago Coastal Area commander inspector Kelvin Lloyd said police wanted to speak to the women who entered the Hyde St flat to ascertain ''what their motives were''.

Hyde St residents should apply the safety and security protocol used by other Dunedin residents, including locking doors and windows.

Within the past three weeks, several people had been arrested and some remained in custody for offences in the area, Insp Lloyd said.

A university spokeswoman said the university was aware of the issue and was seeking opportunities to intervene.