Icy conditions in Dunedin has caused widespread disruption, with bus services in the city delayed and some flights cancelled.

It was another frosty and foggy start, with MetService saying Middlemarch was the coolest place to be this morning, recording -10.6degC.

The roads made it unsafe for some buses to operate including the Opoho/Pine Hill service, the Otago Regional Council advised, and people were warned to expect significant delays.

But by noon, services were operating as normal.

The Dunedin airport has just broken it's record for the coldest day in June. Since records began in 1972, the -8.6C recorded this morning is the coldest June temperature. ^KL pic.twitter.com/PoeVYRxOJh

Dunedin Airport broke its record for the coldest day in June, with the temperature at -8.6degC.

There were delays for two flights travelling into the airport Christchurch and Wellington, and some flights by smaller aircraft were cancelled and replaced with larger planes, a spokesperson told RNZ.

Meanwhile, police are reminding drivers to take care on roads as there have been a number of crashes since yesterday, including a 41-year-old man who slid on ice and into a river near Waipori Falls at 12.48am today.

Senior Sergeant Anthony Bond said the man had been driving to Lawrence but decided to turn back to Dunedin due to the conditions.

Trees caught the vehicle and the man was not injured. Fire crews and ambulance also attended.

A car slid into a parked car at the intersection of Orbell and Fea Sts about 5.45am today, but no one was hurt, Snt Sgt Bond said. Fea St was closed due to ice this morning.

Emergency services were responding to reports of a crash after car rolled on the Beaumont Highway (State Highway 8) at 9.20am today, police said. 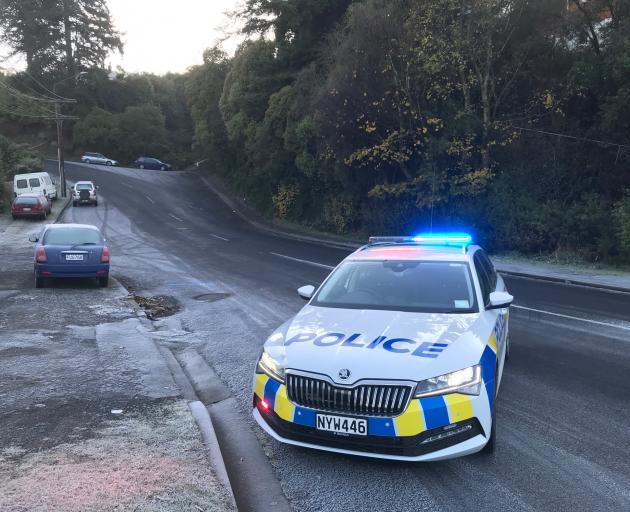 Fea St in Pinehill is closed due to ice. Photo: Gregor Richardson

Ice and frost to ease for long weekend

Winter's icy grip will remain firm on the South for another day today before conditions ease ahead of the Matariki long weekend tomorrow, MetService says.

There was a hard frost in Central Otago but roads were mostly dry, a spokesman for the district council said.

Patches of fog were building in isolated areas, with temperatures ranging from -8degC to -1degC, this morning.

Crews gritted trouble spots but caution was advised, particularly in shaded spots and bridge decks around daybreak when temperatures could drop.

It was also another cold start in the Queenstown Lakes district, with the Lindis Pass (State Highway 8) recording -10degC early this morning, a spokesman for the district council said.

CMA, a chemical that stops ice from forming, had been applied overnight around Wakatipu and down to Kingston.

"Please take care at day break as ice is likely to form."

The Crown Range and Cardrona Valley had mostly dry roads and any damp areas have been well gritted and CMA applied where appropriate. Malaghans Road was -9degC early this morning, CMA has been applied and crews were patrolling.

Glenorchy Road had areas of ice near Sunshine Bay. "These areas have been gritted but extra care is needed in this area."

🐧 Middlemarch in Otago reached -11.2˚C this morning, the coldest temperature at a non-high elevation climate station so far this winter.

Icy roads led to four more crashes in Dunedin yesterday and delayed the start of the school day at primary schools across the city.

Several flights were delayed or cancelled at Dunedin Airport where temperatures dropped to a low of about -7degC.

MetService meteorologist Tui McInnes said today’s weather conditions would be much the same.

Omarama was the coldest place in the country yesterday as it dropped to a low of -11degC, the coldest temperature recorded this year. It was recording -10degC this morning.

Southerlies had brought cold air across the South and a high had settled the weather down, Mr McInnes said.

The resulting cold air, light winds and clear skies created chilly overnight temperatures and conditions and things were expected to stay about the same today.

North East Valley, in Dunedin, is blanketed in smoke after a cold start to the day yesterday. PHOTO: GERARD O’BRIEN

MetService expected frosts for the long weekend but weather systems coming in across the Tasman Sea would bring more northerly winds with them that should lift overnight temperatures.

However, because the fronts were generally coming in from the west the clouds and moisture they were carrying were likely to get trapped in the Southern Alps, leaving largely clear skies for Matariki celebrations in the region.

"Otago, Canterbury, and parts of Southland are actually exactly where you want to be," Mr McInnes said.

Yesterday’s icy start prompted Dunedin police to urge motorists to delay their travel from about 6am and the Otago Primary Principals’ Association pushed back the start of the city’s primary schools until 10am.

Police reported five crashes in Dunedin streets on Tuesday and another five yesterday.

A police spokeswoman said three crashes happened in Heriot Row, all between about 6am and 9.45am, and the road was closed while contractors cleared the street.

A fourth crash happened in Cumberland St when a vehicle hit the barrier as the road crosses the Water of Leith about 8.50am.

The fifth involved a rental van which slid off Coast Rd at 4pm. The two occupants were able to get out of the vehicle.

No-one was injured and they were all ice-related, the spokeswoman said.

Jets had gone out, but services were delayed. Extra capacity would be added today to help with any passengers affected, she said.