'I'd do exactly the same thing again' 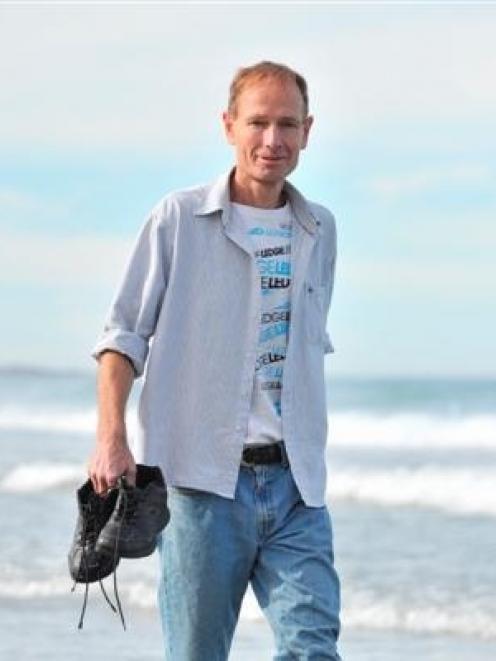 Euthanasia advocate Prof Sean Davison walks in the water at St Clair Beach yesterday on his first day of freedom from a home detention sentence. Photo by Gerard O'Brien.
Convicted criminal Sean Davison became a free man again yesterday, and the first thing he did was walk in the surf at Dunedin's St Clair beach.

"I didn't sleep a wink all night, I was so excited. I was like a kid waiting for a Christmas stocking. They came around at 10am and cut my home detention bracelet off. You can see a bit of a scar where it was," he said, showing his left ankle.

The South Africa-based scientist was convicted in October of aiding the death of his 85-year-old terminally-ill mother, Dunedin doctor Patricia Davison, in 2006 after a trial which ignited debate on voluntary euthanasia in New Zealand and South Africa.

He pleaded guilty to a charge that he "counselled and procured" his mother to commit suicide and was sentenced to five months' home detention.

"I have no regrets about what I did to assist my mother to her death, because I did nothing wrong," he said.

"I've done my sentence, but I committed no crime.

"In the same set of circumstances, I'd do exactly the same thing again.

"Although, I'd rather change the law, so nobody else has to go through what I have.

"I'm not bitter. But I think it's very sad that the law finds me a criminal for an act of compassion."

Prof Davison's partner, Raine, and children, Flynn (3) and Finnian (2), have been awaiting his return to Cape Town since he was sentenced in the High Court at Dunedin on October 27 last year.

"They are the people who have been hurt most by this, because my children have had no father for seven months. It has been a terrible toll on my family back home. For me, every day was just the same."

The case became an international cause celebre. Prof Davison founded DignitySA in South Africa, which will launch a national petition to reform euthanasia laws when he arrives home on Sunday.

"I'm going to arrive back to a press conference at the Cape Town airport. South Africa has been fascinated by my case and conviction here. In South Africa, it's seen as a global issue."

Prof Davison will address a public forum on euthanasia and assisted suicide from 5.15pm to 7.30pm on Thursday at the Colquhoun lecture theatre in Dunedin Public Hospital.