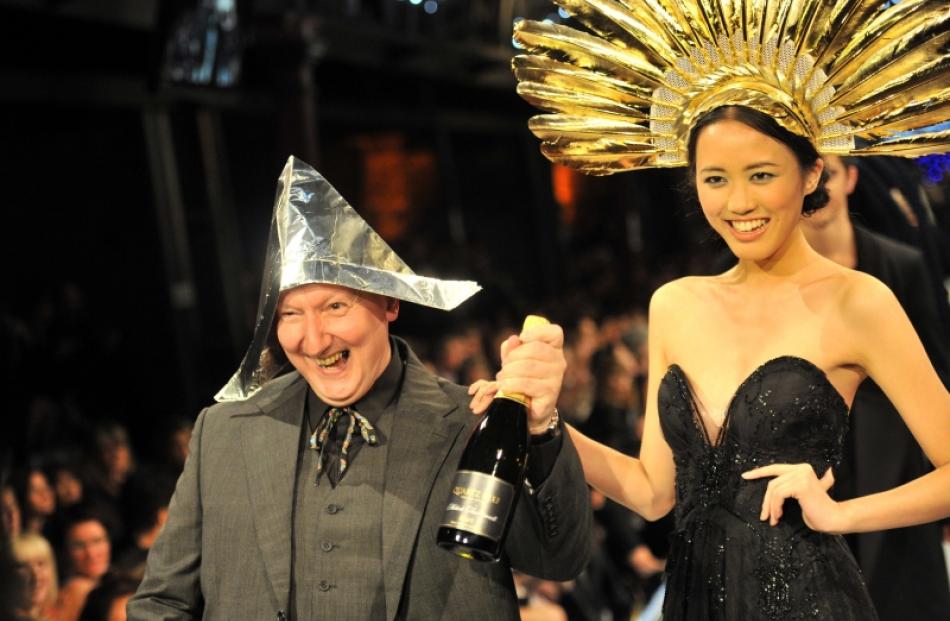 British milliner Stephen Jones wears a hat made from an Otago Daily Times and foil as he celebrates with Shanghai model Ding Yi at the iD Dunedin Fashion Show on Saturday night. She is wearing a gold-plated turkey-feather hat originally made for...

The involvement of 10 models from Shanghai also raised the standard of performance during the iD International Emerging Designer Awards and both fashion shows.

Committee chairwoman Susie Staley said the event was ''looking strong'' for its 15th anniversary next year.

''Part of this is looking at future international collaborations, including developing our relationship with Shanghai, which makes iD even more global in its outlook. It's getting better every year and we're excited about growing the event further.''

The ''80-strong'' media contingent dubbed it the best iD yet, she said.

Jones, whose 33-year career included designing for the world's top fashion houses and showing on runways from Italy to Japan, praised the professionalism of iD Dunedin Fashion Week.

''It was fantastic because it was a really big production. Often hats are part of more intimate productions, but at iD there were lots of lights, lots of models, thousands of people, ballerinas - and with everything together it was really magical.''

He brought 33 hats to show in Dunedin, including a spectacular golden one made for Kylie Minogue and worn during the closing ceremony of last year's London Olympics.

Comprised of large turkey feathers set in resin and gold-plated, it prompted a standing ovation from the 1500 people seated along the railway station's 120m catwalk, both on Friday and Saturday.

All three major shows sold out, as did a showcase of vintage garments from the Sydney-based Darnell Collection.

Of the almost 5000 people who bought tickets to iD events, about 70% were from Dunedin and Otago. The remainder came from throughout New Zealand and overseas.

Longtime hat collector Deborah Quinn, of Brisbane, was a friend and client of Jones and travelled to Dunedin especially to see him at iD.

She said the emerging designer awards and fashion shows were brilliant.

While international aspects of iD proved highlights of the week, it remained a celebration of Dunedin style first and foremost.

Associated events, including gallery exhibitions as well as talks by designers at Toitu Otago Settlers Museum, will continue throughout this month.

Otago Chamber of Commerce chief executive John Christie said the iD committee and all involved in the event's organisation should be congratulated.

The event generated positive national and international exposure for Dunedin, as well as a direct and significant economic boost to the city and wider region, he said.

''You definitely notice the buzz around town for iD fashion.

''It has a wide-ranging impact on a number of different sectors, particularly as events are spread over a reasonable number of days.''

Fashion week brought about $1.6 million to Dunedin each year, as well as an estimated $6 million worth of global media exposure.

With a budget of about $530,000 (excluding GST), it relied on sponsorship from the Dunedin City Council as well as various businesses and organisations.