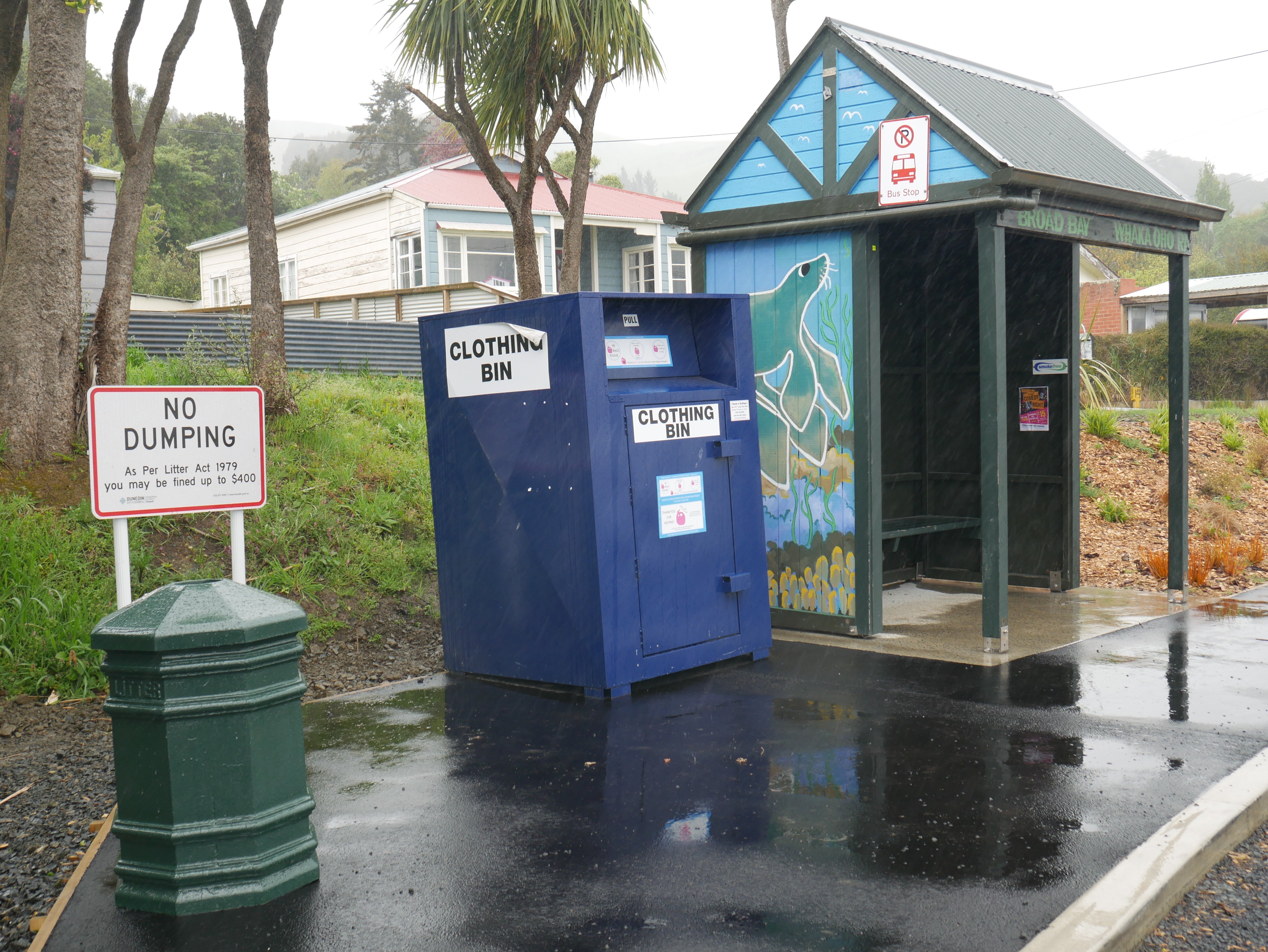 A new ‘‘no dumping’’ sign has recently been installed near a Broad Bay clothing bin, which is a popular spot for people to leave their unwanted goods.PHOTO: JESSICA WILSON
The use of a clothing bin in Broad Bay divided opinions at a community board meeting.

But the Dunedin City Council has made its point of view clear.

The bin, beside a bus stop in Portobello Rd, has been a popular spot for residents to leave and collect unwanted goods.

Recently, a mattress and disassembled bed base were left at the bin and inside the bus stop.

At the Otago Peninsula Community Board’s meeting last week, board members disagreed about whether the bin should be used for that purpose.

Board member Graham McArthur recently spoke to residents who were happy with the situation.

‘‘They felt that the people who owned the bin, who collected it every week, were doing a good job at making sure everything was clean and tidy around it,’’ Mr McArthur said.

He was not surprised to see the bed and mattress while driving through the bay one morning and noted it was gone later in the day.

‘‘Residents were saying it’s the only place ... to be able to do a swap with material that needs to be repurposed and that they were comfortable with that.’’

However, he was aware that other residents were not.

Member Edna Stevenson was concerned there was nowhere for motorists to legally stop if they wanted to access the bin.

Member Lox Kellas did not believe the clothing bin was the place to leave items.

‘‘It’s a clothing bin not a buy, sell and exchange,’’ Mr Kellas said.

People had to properly dispose of their unwanted goods, such as taking it to the landfill, he said.

‘‘People have got to be compliant. It’s not a junk yard.’’

Cheryl Neill agreed rubbish should not be dumped at the bin, but believed it served a good purpose and people were not going to drive all the way to Green Island.

Mr McArthur asked if it was possible to find another spot for the bin.

‘‘At the moment, as far as the swap part of it goes, the bin is serving a purpose of being somewhere that people can identify that they can put stuff and other people can come and get it if they want it.’’

Chairman Paul Pope said the board needed to find out if the council gave permission for the bin to be there.

‘‘But I think it has to be made clear to the community that this is not an area that is a drop-off point,’’ Mr Pope said.

If residents wanted that, they needed to organise it themselves elsewhere, he said.

Mr McArthur and Ms Neill would talk to residents about what they wanted and come up with some solutions.

If the bin remained, the board voted to fund a sign reminding people of their responsibilities while using it.

However, when The Star visited the site on Tuesday morning a sign was already there.

It was installed by the Dunedin City Council in the past few days in response to concerns raised about illegal dumping in the area, a council spokesman said.

Sadly the Dunedin recycling facilities are lamentable. The Green Island site is too far away for many and the charges exorbitant. DCC makes little effort to provide local recycling facilities and is more part of the problem than the solution. Whilst a clothing bin hardly seems the place to 'recycle' a bed and mattress you can hardly take it to Green Island on the bus, even if there was a handy bus! Surely the Community Boards and DCC can come up with a solution.