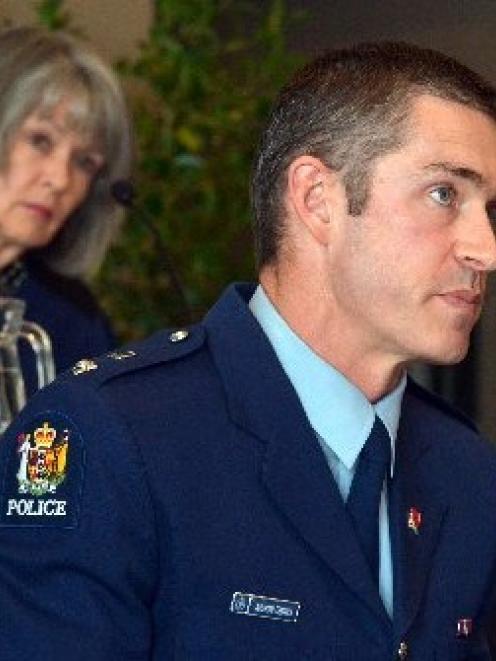 Chief Coroner, Judge Deborah Marshall looks on as Supt. Andrew Coster listens to a question during the fourth day of the Livingstone inquest in Dunedin today. Photo by Gerard O'Brien.
Police failed to protect Katherine Webb and her children, Bradley and Ellen Livingstone, an inquest heard today.

"We fell short,'' Andrew Coster, Otago's top policeman, conceded during questioning on the final day of the inquest into the deaths of Bradley (9) and Ellen (6), and their father Edward Livingstone.

Chief Coroner Judge Deborah Marshall heard yesterday that Livingstone had been drinking alcohol in the hours before he killed Bradley and Ellen in their beds on January 15, 2014, in the St Leonards home the children shared with their mother.

Despite this he was well under the legal limit to drive and the dosage of antidepressant in his blood was below the therapeutic dose, the court heard. Blood analysis taken after he died found 47mcg of alcohol per 100ml of blood. The legal limit for drink driving at the time was 80mcg.

Livingstone had twice breached a protection order preventing him from contacting Ms Webb in the months before the deaths.

During questioning today from Anne Stevens, counsel for Ms Webb, Southern district commander Supt Coster admitted police made a number of "significant failures'' in their duty of care to Ms Webb and her children.

Despite that, he would not "speculate'' as to whether police could have prevented the deaths.

"You are asking me to speculate what would have occurred if A, B, C, D had happened, I simply can't do that,'' he said.

"All I can do is comment on what didn't occur.''

Dunedin police failed to record and investigate a number of bullet cartridges that were given to the children by Livingstone, ostensibly as a present.

"Anything could have affected the final outcome,'' Supt Coster conceded when asked if police failure to follow up those matters might have contributed to the deaths.

"Katharine and the children not being home that night could have affected the final outcome.

"I'm not prepared to speculate on what might have happened.''

Despite their failures police were "well intentioned'' in their care of Ms Webb.

"Police are 100% committed to protecting victims and this is a really tragic case but we can't change what happened,'' Supt Coster said, choking back tears.

Earlier he said Livingstone thought about killing his children for some time.

"He had a sick ideation and [it] suggested a level of commitment to carry out these acts,'' he said.

The court heard from a former probation officer this morning.

Liqueshia Dougherty told the court the Livingstone family was discussed at a meeting of Dunedin's Family Violence Inter-Agency Response System agencies in August 2013.

At that meeting Livingstone was deemed a "high risk'' to his family, but it appeared no further action was taken in regards to this information.

Livingstone shot Bradley and Ellen with a 12-gauge Stoeger shotgun.

He was found dead in the bedroom he formerly shared with his estranged wife, Ms Webb; a shotgun was found next to his body.

Livingstone stole the Stoeger shotgun used in the shooting from his one-time flatmate Philip Mans.

Livingstone stole the gun from Mr Mans' firearms cabinet using a key to Mr Mans' Milton house which was stolen at an earlier date, the court heard earlier this week.

Dr David Chaplow told the coroner's inquest it appeared Livingstone was weighing up his options in the days leading up to the killings.

Livingstone spoke to his new partner, Karen Wright, while drinking on a park bench little more than an hour before he shot his children with a 12-gauge shotgun, Dr Chaplow said.

"What we know from the lady friend [Ms Wright] is by half past 8[pm on January 15, 2014] he was sitting in a park feeling quite morose and thinking about what he's going to do,'' he said.

It appeared Livingstone was "hedging his bets" for sometime before the killings.

"It seemed to me he had been thinking about his options, so to speak, for a day or two - hence stealing the gun, stealing they key,'' Dr Chaplow said.

Despite a number of "red flags'' coming to the attention of the clinicians dealing with Livingstone, the slayings were ultimately unavoidable, Dr Chaplow said yesterday.

Robin Bates QC, counsel for police, asked "if somebody makes up their mind to do this sort of thing, there's a high likelihood they will do this despite all the interventions, is that a correct comment?''.

Livingstone seemed to "impression manage'' his clinicians, not allowing them to gain a full insight to his personality.

Livingstone's duplicity became apparent during day one of the inquest when the court heard he had deceived his psychiatrist Dr Christopher Wisely.

A co-worker told the court on Tuesday she felt Livingstone knew "what to say to the right people to get them off his back''.

Livingstone often smelt of alcohol at work and appeared dishevelled in the months leading up to breaching his protection order twice.

Ms Webb sought a protection order and it was first issued on May 31, 2013, and finalised on August 13.

On August 7, 2013, Livingstone breached the order for the first time.

The inquest has concluded and Judge Marshall reserved her findings.