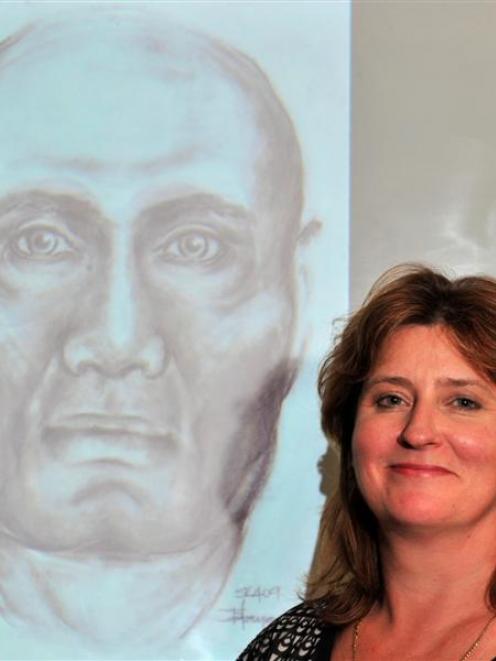 This visual reconstruction depicts the face of an early rangatira (leader), aged about 30, who was one of the first people to arrive in New Zealand. Associate Prof Hallie Buckley, of the University of Otago anatomy department, is also pictured. The reconstruction is by Dr Susan Hayes, a facial anthropologist at the University of Wollongong, Australia. Photo by Linda Robertson.
A University of Otago-led scientific team has shed new light on the first New Zealanders, who reached the ''final frontier'' in human settlement of Earth, about 700 years ago.

The multidisciplinary team provided the striking new insights into the lifestyles, diet and movements of the first New Zealanders by using cutting edge technology to analyse isotopes from their bones and teeth.

Researchers identified what was likely to be the first group of people to colonise Wairau Bar at Marlborough, on the South Island east coast, possibly from Polynesia about 700 years ago.

In research published yesterday in the prestigious international journal Plos One, the scientists also presented evidence suggesting individuals from two other groups buried at the site had likely lived in different regions of New Zealand before being buried at Wairau Bar.

''It [New Zealand] marks the final frontier, in terms of human colonisation of the planet.''

Scientists point out New Zealand was the last sizeable land mass to be settled by humans.

Prof Buckley said to have come from ''a tropical environment in Eastern Polynesia to a temperate environment would have been extremely difficult''.

The researchers undertook isotopic analyses of samples recovered from the koiwi tangata (human remains) of the Rangitane iwi tupuna (ancestors) before their reburial at Wairau Bar in 2009.

Dr Rebecca Kinaston, the article's first author and a postdoctoral fellow at the anatomy department, conducted isotope analyses of bones and teeth. University of Otago archaeologist Prof Richard Walter said New Zealand's first inhabitants had not been washed ashore by accident - they were ''extremely capable and well-resourced people'' who had set out to colonise.

In archaeological terms, he could not ''think of any other site like this in the world'', in terms of its importance for researching early human settlement.'It's like Ground Zero for New Zealand'' in terms of when the country ''really started'', he said.