Warned, in black and white 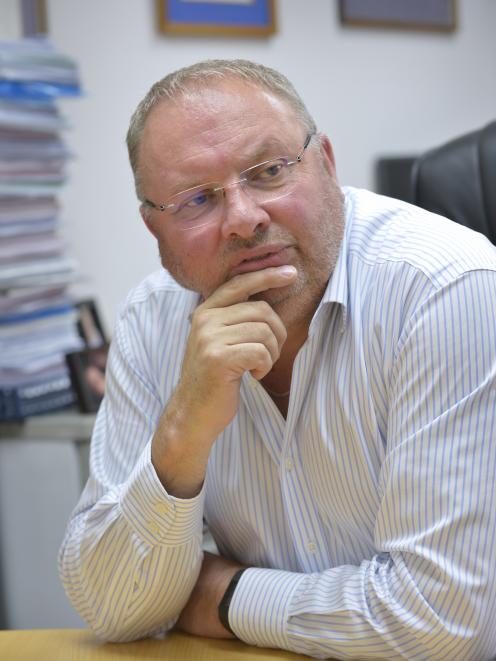 DCHL chairman Graham Crombie ... state of the network definitely ‘‘a problem’’. Photo: Gerard O'Brien.
The perilous state of thousands of Aurora power poles is a legacy of neglect stretching back decades, a whistleblower says. But it is also just the latest debacle in a history of headaches for Delta. Chris Morris and Vaughan Elder report.

The warning was there in black and white.

It came in an Otago Daily Times article, published in 1998, blowing the whistle on maintenance cuts across Dunedin and Central Otago’s electricity network.

Unless the practice changed, the consequences for the network would be dire, he warned.

"I believe that today’s policies will result in the network requiring a huge amount of capital expenditure in 10 or 20 years ..." he said.

But, far from rejecting the allegations, then-DEL chief executive John Walsh — later the man in charge of Delta — defended the cuts.

Yes, he said, his company was carrying out less maintenance work, as parts of the network had been "over maintained" in the past.

The network performed well, he insisted, but it was more economic to let equipment wear out than replace it.

Fast forward 19 years to the present, and former Delta worker Richard Healey has resigned to blow the whistle again — this time on the dangerous state of 2910 power poles across the network.

He pointed the finger at his former employer, which maintained Aurora’s network as part of the interlinked relationship between the two Dunedin City Council-owned companies, which shared staff and board members. But he also blamed maintenance cuts ushered in with the corporatisation of the council’s previously in-house electricity operations, beginning in 1990.

The cuts were designed to maximise profits and boost dividends to the parent company, Dunedin City Holdings Ltd, and its shareholder, the Dunedin City Council, he believed.

That has meant $150 million stripped from Aurora’s books since 2003, and a further $55.5 million from Delta, which maintains Aurora’s network, since 1998, company reports showed. The money was used by the DCC to pay for projects, offset rates and balance the books, at the expense of the electricity network. But power poles were just the tip of an iceberg as the wider network showed similar but less obvious signs of neglect, he said.

Mr Healey said the deferred maintenance had been able to continue precisely because Aurora’s network had been built to last. It began life as the Waipori power scheme in 1904, and was soon after acquired by the DCC, which ran it in-house. That continued until 1990, when the council established Dunedin Electricity Ltd and a second company, Waipori Power Generation Ltd, for its generation and distribution businesses.

"There was a view formed ... that everything had been built to too high a standard, and that you could trim back and save costs," he said.

Deferring maintenance had no immediate impact, but eventually a "tipping point" was reached, he said.

"Suddenly reliability and safety start to become an issue. But by then you’ve built up a belief in your shareholder’s mind that they can continue to drag out a certain amount of profit from the network.

"That amount of profit was truly just burning the asset ... you get to the stage where the asset is no longer safe and you can’t give the shareholder the return they’ve come to expect over the last 20 years."

He blasted the performance of those in charge, saying a procession of chief executives had enjoyed "stellar careers producing record profits" by running down the asset’s maintenance, he said.

It was a view backed by others, including current Delta worker Graeme Jeffrey, who, in an email to Mayor Dave Cull and councillors, said the companies had "closed their eyes in the pursuit of maximising profit".

"Bean counters have been running an asset that should have been run by electrical engineers. They continue to do so, and are now running for cover, even though this has been known of and talked about for years by staff."

Mr Cull, contacted by the ODT, agreed both the council and its companies had been guilty of short-term cost-cutting at times in the past.

"It comes back to bite you eventually," he said.

Previous councils had exerted "pressure, to some extent behind the scenes" to "greatly increase dividends to the council", he said.

That practice was addressed from 2011, when the company structure was overhauled in an independent review led by Warren Larsen.

Annual payments from the companies dropped as a result, from $23.2 million to $15.7 million in 2011, then to $11.15 million from 2014, where they remained. But the damage had been done, as the pressure for dividends "incentivised" Delta to cut maintenance spending, borrow money for dividends and invest in risky ventures, Mr Cull said.

That included Jacks Point and Luggate investments, which eventually led to a $6.4 million loss for Delta. It was a concern detailed in 2011, when Mr Larsen’s review concluded council demands for cash "has clearly come at a cost" for the companies. The Office of the Auditor-general agreed, saying in its 2014 report into Delta’s land purchases that DCHL’s board had agreed to the extra cash demands "under protest" in 2006.

"Any money that Delta has lost on other developments is money that is not available for working on the network. Every dollar lost somewhere else is a dollar out of the kitty."

The council also had to shoulder some of the blame, having implemented a governance structure that put the companies "at arm’s-length".

"If they’re doing that, they need to have confidence that the management, the decision-making processes, are effective and efficient. Clearly that hasn’t happened."

• Key figures in Delta and Aurora’s history declined to comment this week, including former chairman Ray Polson, current chief executive Grady Cameron, and long-serving board member Stuart McLauchlan. The ODT asked repeatedly for an interview with Mr Cameron, but he pulled out on Thursday night, saying he had "nothing to add" beyond emailed responses.

Mr Walsh, the chief executive of Dunedin Electricity Ltd and then Delta until 2009, was also reluctant to comment on the past, but defended his approach. The companies had "a good handle" on maintenance during his time, he insisted, and the energy network was a top performer. That was despite maintenance cuts, including reducing staff involved in network renewal — from more than 300 down to about 140 — and the frequency of inspections, he said.

"It was more economic to go there less frequently, and when you did turn up you might find something was wrong ... and you’d do the maintenance then," he explained.

However, the warnings about maintenance cuts in 1998 were "coincidental", and the nearly 3000 dangerous poles now scattered across the network proved nothing, he insisted.

Delta and Aurora’s incumbent chairman, Dr Ian Parton, said from Auckland it "may well be" that pressure for dividends had led Delta to reduced maintenance spending in the past.

Such pressure had pushed Delta into risky investments, like Jacks Point and Luggate, and into Yaldhurst, where the company was still owed a $13million unpaid bill, he argued. Those headaches were not created by the current board, which had done "a bloody good job" rectifying past mistakes, he believed. Despite that, a "fairly consistent" demand for dividends had continued from DCHL, albeit involving reduced sums, he said.

However, there had been ‘‘no decision at all’’ to defer maintenance during his time with Delta, beginning four years ago, he said.

"In fact, quite the opposite — we’ve lobbied DCHL quite strongly ... to take less dividends and spend more money on capital assets, because they were at risk," he said.

The company had an asset management plan, including an "active" pole replacement programme, and was investing "all we’ve got" to upgrade the network, he said. That included a $400million capital programme planned for the next decade, split between renewals and new infrastructure catering for growth in Central Otago.

The state of the power poles was "not satisfactory", but staff were "working on it", he said.

• DCHL chairman Graham Crombie, interviewed yesterday, said the money taken out of the companies in the past was "probably too high", resulting in "underspend in that network over a large period of time". He was not convinced there was a "direct correlation" with deferred maintenance, but the state of the network was definitely "a problem".

Whether Delta’s asset management plan, or the performance of its current board and staff, was deficient would be for the review to consider, he said. But asked if the situation should have been avoided, Mr Crombie said: "Yes, if you could have done that.

"Why wasn’t it avoided? That’s a question I don’t know the answer to."

But asked if Ian Berry’s predictions had proven to be correct, Mr Crombie was quick to respond.