It was the first of its kind in Dunedin — a brazen, armed hold-up by a gunman who made off with Cadbury’s entire weekly payroll, worth $53,000. Now, as the 40th anniversary of the heist approaches, the case file remains open. Chris Morris reports. 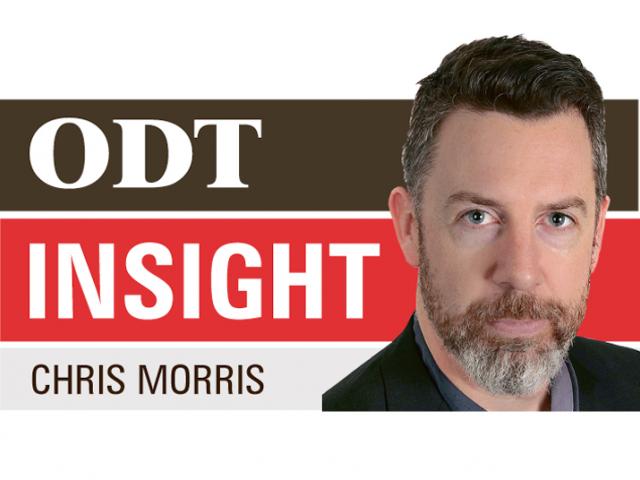 The clock had just ticked past 9.30 on an autumnal morning in Dunedin when the gunman made his move.

A security guard had just pulled up outside the Cadbury chocolate factory's Castle St entrance and, clutching a large brown suitcase, made his way towards the office.

It was a week's worth of wages for the chocolate company's hundreds of factory workers, who were to be paid later that day.

But as the security guard crossed the footpath, heading towards a flight of stairs leading to the Cadbury office, a voice called out from behind: "Hold it." 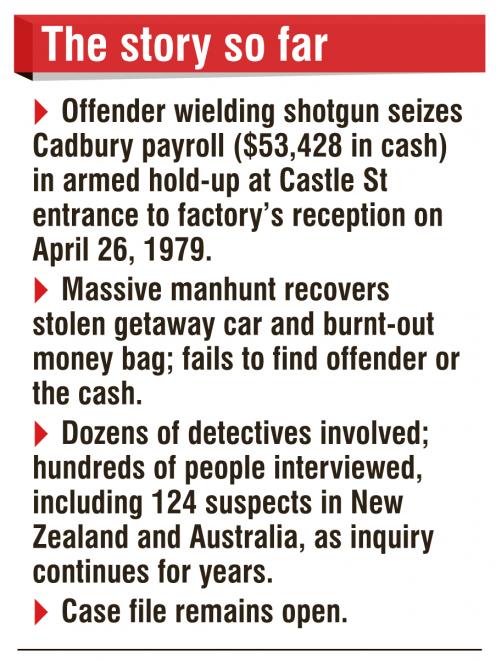 The security guard ignored the order and tried to run, heading up the stairs until the call was repeated: "Drop it."

Then the guard stopped, turning to face his assailant, and found a single-barrelled shotgun pressed against his chest.

Wielding the shotgun was a tall, solidly built man wearing a balaclava, who snatched the money bag, fled back to his car and escaped at high speed.

Fast-forward 40 years and the daring daylight heist remains one of the largest - and most brazen - in Dunedin's history.

The loss of the payroll, worth more than $384,000 in today's money, sparked a major manhunt, involving dozens of detectives and hundreds of witnesses and suspects, that continued for years.

Despite that, and the offer of a 10% reward, the offender has never been found and rumours continue to swirl - was it an inside job, and did the gunman escape with his loot to Australia?

All that remains are unanswered questions and a small trail of clues left behind.

Otago Daily Times reports from the time detailed how police swooped on the scene within minutes of the hold-up, placing a cordon of checkpoints on main roads out of the city, as far away as Balclutha and at Dunedin Airport. 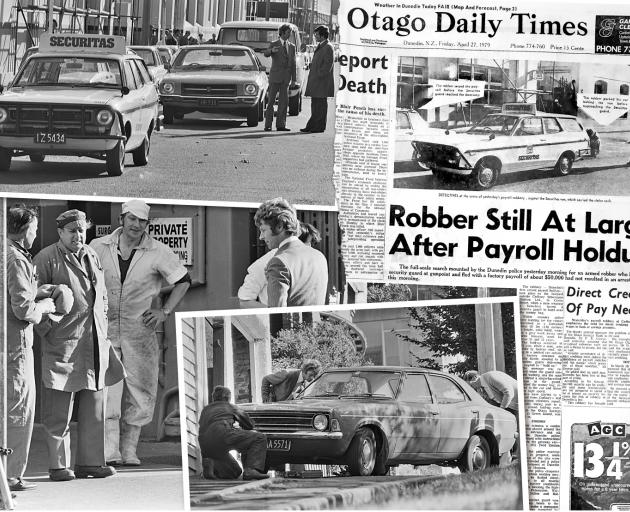 A witness described seeing the vehicle screech to a halt and spin around, nearly hitting a house, before the driver fled on foot.

The car was later found to have been stolen from a car yard in Gore the previous night, and fitted with false number plates taken from another vehicle in Milburn.

Initially, police expressed confidence the offender remained in the city, having failed to catch him at road blocks.

A team of 25 detectives working on the heist were later joined by others from Christchurch and Invercargill, and an identikit picture showing the offender's likeness was made public.

Days later, on April 29, the burnt-out money bag was

found amid the remains of a small bonfire on a beach at Moeraki.

Traces of other evidence were found amid the ashes, including the scorched remains of the number plate taken from the getaway car.

And, as time passed, police were forced to accept the gunman had slipped away.

But, in the intervening years, interest in the case has not. 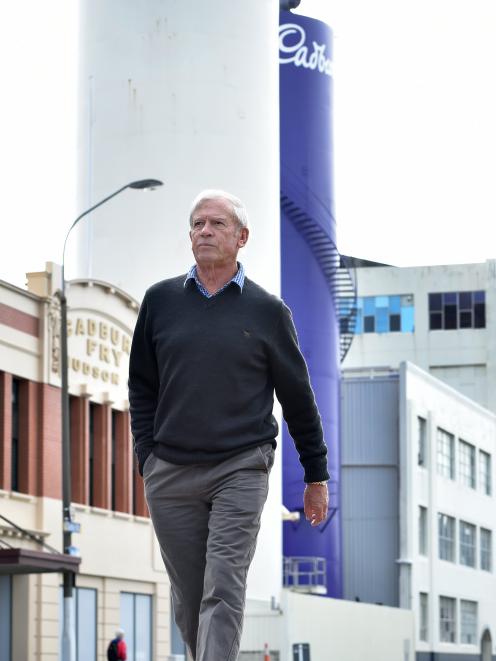 Neville Horne, who was a financial accountant at Cadbury at the time of the heist, is still asked about it. PHOTO: PETER MCINTOSH
For Neville Horne, the heist remains a topic of conversation to this day.

Mr Horne, now retired and living in Wanaka, was a 38-year-old financial accountant at Cadbury on the day of the heist.

He was later to become a director of the company, and even now, 40 years on, he still gets asked about the heist.

"It made for huge publicity in Dunedin," he told the ODT last week.

"Everyone sort of knows Cadbury's or someone who was working at Cadbury's, and for a payroll to be held up of $50,000, that was huge news.

"Even now ... they say `oh, you had that big payroll snatch years and years ago'. It's just amazing how people remember."

For Mr Horne, events surrounding the heist began with a birthday shout.

He had celebrated his birthday the day before, but the factory was closed because it was Anzac Day.

Early the next day, on the morning of the heist, his colleague Runa Chesney was dispatched to buy Mr Horne's shout for the office.

She also still vividly recalled the events of 40 years ago.

She had parked her car outside the Cadbury office in Castle St earlier that morning, and had left to collect food for the office shout convinced her car park would be taken by the time she was back.

When she returned, she found her car park still empty, but also spotted another car parked across a driveway leading into the Cadbury site, just in front of her still empty space. 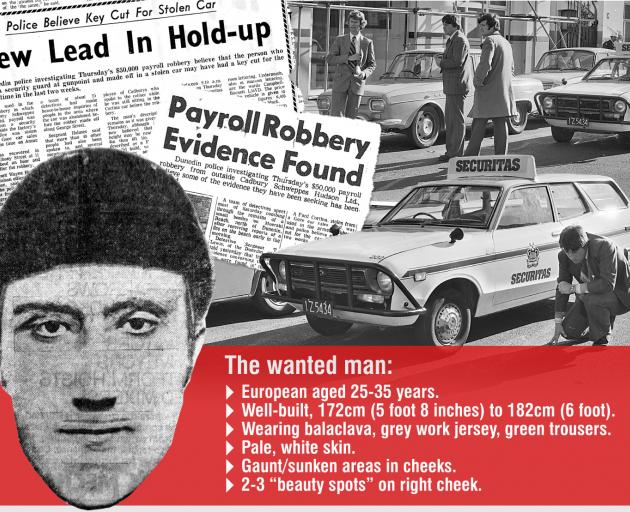 Pulling up next to the car, Ms Chesney looked in and spotted the driver still sitting inside, wearing what appeared to be a rolled-up balaclava.

"I thought at the time it was really, really strange that [he] hadn't backed into there, when the car park was sitting there.

"He was just sitting there. There wasn't one flicker of emotion. He didn't turn and look at me. He didn't move. He just sat there. It was strange.

"The thing that struck me was the whiteness of his face. I suppose he was nearly s... himself."

Ms Chesney thought nothing more of it, parked her car and climbed the stairs to the office, visiting the bathroom once inside.

By the time she emerged again, less than five minutes later, "it had all happened".

Police were soon swarming the scene and Ms Chesney, as one of the few witnesses who had spotted the offender, spent "hours" at the Dunedin police station.

That included being asked to walk down a line-up of suspects and identify a culprit.

Five men were lined up and Ms Chesney was escorted down the line, scrutinising each man in turn.

"It was awful, I tell you. My feet tap-danced along that floor because I was so nervous about everything.

"I can remember walking along and thinking `gosh, he looks familiar' and I chose him, but he wasn't the right one. They told me afterwards."

And, as the hunt for the offender continued and the trail cooled, the rumours began to swirl.

"People used to think, whether it was true or not, that it might have been an inside job, because [the offender] knew that day exactly what time that security guard got there.

"He was on his own and he was coming up the stairs, and that's when the guy robbed him."

Another theory involved the gunman escaping to Australia with the cash.

It was a theory explored during the police investigation, which continued for years after the heist and eventually identified 124 suspects, including a list of significant candidates for the crime.

Among them was a Dunedin man who moved to Australia after the April 26 heist, and was eventually interviewed at length by Victorian police in Melbourne in 1985.

The man was suspected of being involved in the Australian drug trade, but he denied having any role in the Cadbury heist and was never charged.

Mr Horne said he had heard the theories, but had no evidence of his own to support any of them.

He did not believe the heist could have been an inside job, but the idea the gunman had escaped to Australia - and the drug trade there - made sense to him.

One thing was clear, though - the Cadbury payroll would have been a tempting target.

The company was among Dunedin's largest employers, with up to 1000 staff during seasonal peaks, and its weekly payroll was believed to be the biggest in the city at the time.

While executives and other salaried staff were paid directly into their accounts, factory workers were paid in cash, once a week on Thursdays, at the end of their shifts.

The first shifts ended about 2pm each day, which meant - to be ready on time - the payroll needed to be collected from a nearby ANZ Bank and delivered to Cadbury about the same time each morning.

For years, a pair of Cadbury cashiers had walked up the road each Thursday morning to collect the cash and carry it back to the chocolate factory.

Eventually, a few years before the heist, the process was deemed "a bit risky" and a security company, Securitas, was contracted to do the work.

Court documents relating to subsequent High Court and Court of Appeal proceedings between the two parties - Cadbury and Securitas - detailed the procedure.

A Cadbury wages clerk would phone the bank early each Thursday morning, advising them of the denominations needed, so the bank could be ready when a security guard arrived.

Sometimes two guards were used, but often it was only one - a 21-year man who was unarmed, driving an armoured Securitas station wagon.

The guard would stop first at the Cadbury factory to pick up a locked bag with a cheque inside, made out to the bank.

He did not have a key to the bag, but one awaited at each end of the short journey.

The bag containing the cheque was then taken in the Securitas vehicle to the bank, opened by bank staff and the cheque exchanged for cash.

The bag would then be locked again and the cash taken back to the Cadbury factory.

The guard made a habit of varying his route, but Cadbury's tight timeframes meant he could not vary his timing of his arrival at the factory.

On the morning of the heist, only one guard was working and the gunman was waiting - fuelling speculation of an inside job.

Mr Horne said whoever was behind the heist had obviously been watching closely.

"It was always believed it had been a well-scoped exercise. They had probably watched for several weeks how Cadbury got their wages and the procedure that they went about doing it."

The heist eventually led to court proceedings in 1985, as Cadbury Schweppes Hudson Ltd took Securitas (NZ) Ltd and Securitas Holdings Ltd to the High Court over failures in relation to the heist.

Judge J Hardie Boys, ruling in favour of Cadbury, said there was "no cause for criticism" of the guard's actions, but found Securitas to be in breach of its duties.

Cadbury was awarded the sum of $53,428 - a ruling later upheld by the Court of Appeal in 1988 - and the heist also prompted the chocolate company to switch to direct credit payments for all staff.

Since then, information about the heist has continued to trickle in, and be investigated, until drying up completely in more recent years.

Despite that, the case file remained open and the matter unresolved, Detective Inspector Steve Wood, of Dunedin police's CIB, said.

And, if anyone wanted to clear a guilty conscience, there was still time, he suggested.

"It's fair to say as time passes it becomes less likely ... but it's happened before.

The offender was the worst kind of scab. He stole workers' wages.

Potocki d' Anti Nazi Resistance, you are mistaken. He stole Cadbury's money, not workers'. They still had to pay their workers so they had to get more money out of the bank. For the workers the only disadvantage was that some of them got their pay a little later than usual.