The group is urging the Dunedin City Council to lower the speed limit along Highcliff Rd from 70kmh to 50kmh, and replace the give way sign at the end of Camp Rd with a compulsory stop.

Camp Rd resident and Pukehiki District Hall Society co-chairwoman Lynn Samuels said the intersection was a "recipe for a problem'' and she had been working to get the speed limit changed since 2003.

Vehicles making the sharp left turn from Camp Rd into Highcliff Rd often crossed the centre line, and a bank to the left of Camp Rd made it hard to see oncoming vehicles.

There was also difficulty when buses and large vehicles turned right into Camp Rd, from Highcliff Rd, while another car was sitting at the intersection.

Residents who lived behind the Pukehiki Community Church, on the corner of the two roads, struggled to cross Camp Rd safely because of cars driving at speed. 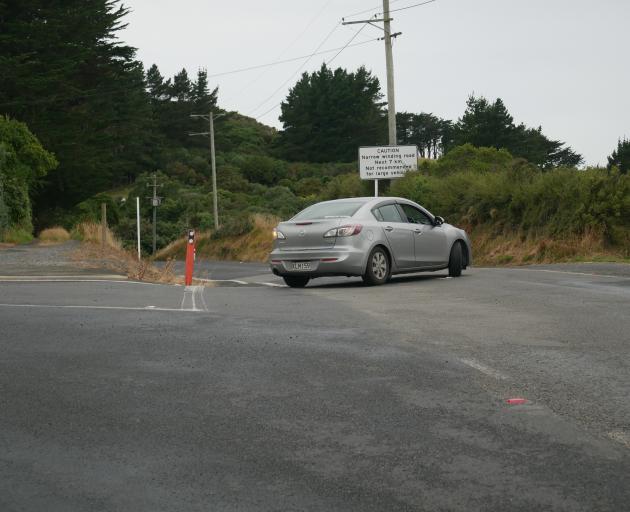 The driver of a rental car crosses the centre line while turning left from Camp Rd into Highcliff Rd. PHOTO: JESSICA WILSON

Highcliff Rd resident Trish Penman said the mixture of locals driving to the speed limit and slow tourists was dangerous.

Some days the intersection was "absolute chaos'' and she had seen cars stop in the middle of Highcliff Rd, which caused others to speed past on the wrong side of the road.

The group had approached the council several times about the speed limit and intersection.

"Do they [the council] have to wait until something actually happens for things to be addressed?''

Her husband, Robert, said it was just "luck'' there had been no crashes.

On Tuesday, The Star saw a car travelling along Camp Rd towards the Highcliff Rd intersection, swing right so it could turn left around the corner, and cross the centre line in Highcliff Rd.

Ms Samuels said Otago Peninsula Community Board member Christine Neill had been "very supportive'', and the group was trying to be "proactive'' about the issue.

She said Senior Constable Aaron Smith informally monitored the road a few weeks ago, and clocked people travelling a range of speeds from 30kmh to 70kmh.

Community board chairman Paul Pope said Mrs Neil raised the issue at the latest board meeting, and the area was a popular tourist destination.

"Any way that we can make that part of the road safer for all concerned is the best thing at the end of the day.

"It's just a matter of finding out what council can do and go from there.''

The Dunedin City Council was unavailable for comment when The Star contacted them earlier in the week.