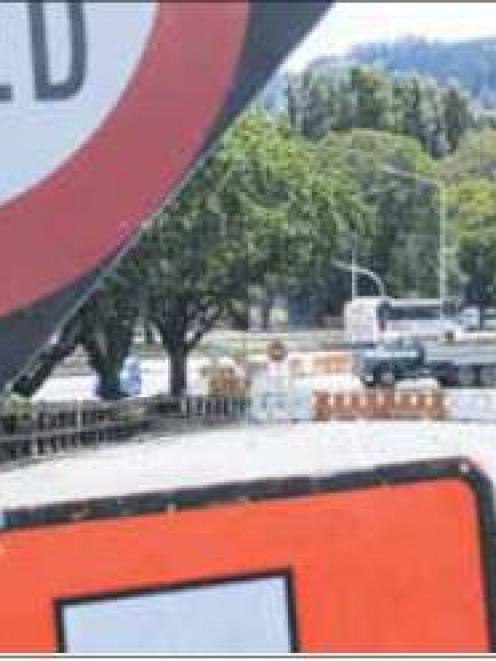 It is more than two months before the next scheduled High Court appearance for the city council and Mr Hall over a dispute which has kept traffic lights at the intersection of Frederick St and Anzac Ave turned off and the northwest portion of the railway overbridge closed.

While some businesses on the harbour side of the bridge had no complaints, others said they and their customers were frustrated by the restricted access.

Brian Russell, Dunedin branch manager of truck rental firm TR Group Ltd, said some customers had been annoyed by the impact of the road closure.

"The turn-off coming back from Port is tight," Mr Russell said.

"You can't stay on your own side of the road which is a problem, especially if traffic is coming off the bridge at the same time."

The manager of another company, who did not want his name used because of business links with parties in the dispute, described the road closure as a "pain in the neck".

In August, council city environment manager Tony Avery confirmed a High Court injunction had been obtained by Anzac Ave landowner Doug Hall, stopping the council from commissioning the lights at the intersection of Frederick St, Anzac Ave and State Highway 88.

In December it was reported the issue related to the entrance to a yard Mr Hall owned, next to the lights.

Court documents showed the council and Anzide Properties Ltd, of which Mr Hall is the sole director, as the parties involved in the dispute, it was reported.

Contacted by The Star, Mr Hall and Mr Avery both said they could understand frustration was growing.

"Personally I haven't heard of frustrations from businesses, but I'm sure there are," Mr Avery said.

Because the matter was subject to a High Court order there was little he could say about the issue, he said.

"We are still hopeful of finding a resolution without going to court."

Mr Hall thought the matter was likely to end up in court.

Court dates have been set and deferred several times.

The next court date was set for April 24, Mr Hall said.