'It's not good': New hole opens in Esplanade 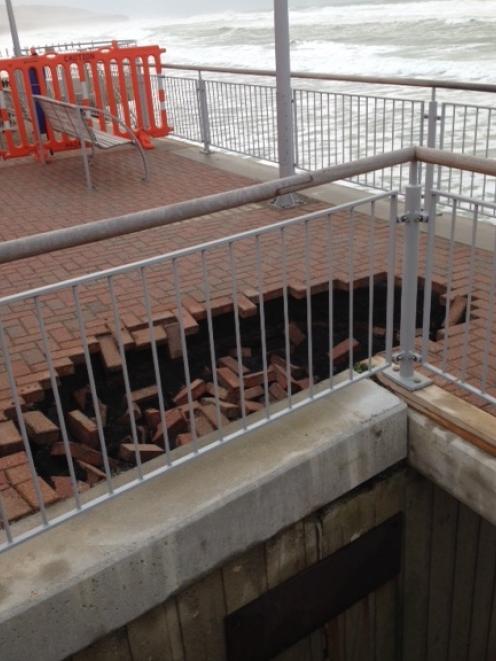 A new hole in the Esplanade opened up last night, beside the area where the surf club ramp was, after a week of big tides.

The Dunedin City Council has spent $680,000 in the past year fixing the Esplanade and trying to keep sand in front of the St Clair sea wall after it was undermined during a series of king tides in May last year.

The big tides at that time sucked sand away from the beach, exposing the bottom of the wall and allowing the fill behind it to be sucked out too.

Council roading maintenance engineer Peter Standring, who inspected the new hole last night, said the council was notified about it about 5pm yesterday. The eastern end of the Esplanade has been cordoned off.

He said that as part of an interim risk management plan, in place while a longer-term solution was worked out, the wall was inspected visually each week and the sand levels checked fortnightly. The most recent check, last week, showed 2m of sand at the foot of the wall.

The king tides, related to the recent ''super moon'', were expected to continue for another few days.

It was unclear what, if any, emergency work could be done in the meantime to try to stop more slumping until the wall and beach could be inspected at low tide today, he said.

Tonnes of rocks have been dumped in front of the wall. The ramp used by the St Clair Surf Life Saving Club, around which much of the erosion has happened, has been moved in an attempt to keep sand in the area.

In May, the council voted to spend $95,000 on the interim risk management plan, which included the possibility of spending another $160,000 to $255,000 (set aside at present for footpath renewal) should any of the identified risks come to pass before longer-term options for keeping sand on the beach can be considered at next year's long-term plan discussions.

After visiting the Esplanade last night to see the hole, council chief executive Dr Sue Bidrose said the council always knew what it had done was a temporary fix and there was a risk of more slumping.

Asked whether the council would now have to bring forward discussions on long-term fixes, she said that would be have to be discussed over the next few days.

Working out a long-term solution was a complex matter and the wall would be fixed while that was done.

''It's not good. Clearly, it's not what anyone of us want. And that longer-term solution is what all of us are looking forward to.''