By Rob Kidd
0 Comments
The "barbaric" slaying of a miniature horse has forever tainted a coastal Otago township, a court has heard.

When 11-year-old Star was found with 41 stab wounds in a Waitati paddock in February last year, the tight-knit community was cloaked in sadness and paranoia.

Fingers were quickly pointed in the direction of 50-year-old Reginald Robert Ozanne, a relative newcomer and someone with a history of addiction and dishonesty.

So keen was the man to distance himself from the allegations that he called a public meeting at the local library and even paid Star’s owner, Mandy Mayhem-Bullock, an impromptu visit at her home to say he was not responsible.

Mandy Mayhem-Bullock (right) looks on as her husband, Lee, is embraced by a supporter after sentencing in the Dunedin District Court yesterday. PHOTO: GERARD O’BRIEN

It was to be more than four months before police charged him, and yesterday he was jailed for two and a-half years before the Dunedin District Court after pleading guilty to a charge of wilfully ill-treating an animal.

Defence counsel Deborah Henderson said her client only denied the offending initially because he had no memory of the night in question and wanted to review the evidence against him.

Ozanne, she said, had downed half a bottle of home-brewed whisky and taken prescription painkillers that day. 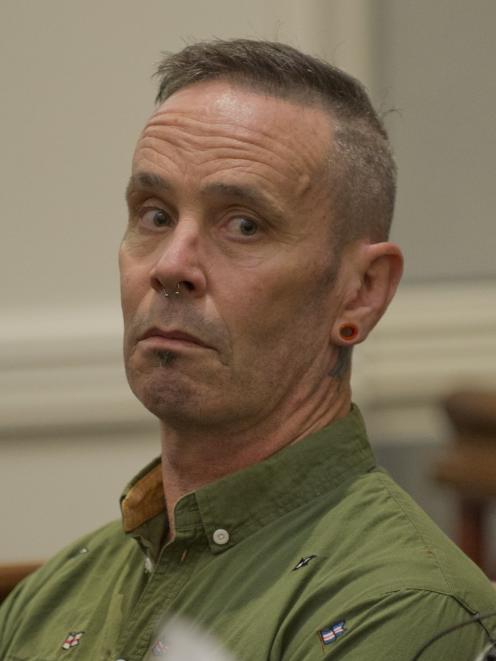 Judge Michael Crosbie said the defendant’s denials during the immediate aftermath could be viewed as "reprehensible".

"You front-footed your innocence through the media and you deflected the blame in the direction of others which, in a small community, lands somewhere," he said.

"The offence was cruel if not barbaric, seen in the number of wounds inflicted on this harmless family pet."

Mrs Mayhem-Bullock read a statement in court in which she spoke about the "horrific and bizarre" ordeal and the guilt she carried.

"Somehow I placed [Star] in the path of a monster," she said.

"I replayed that gruesome scene in my head ... a dark figure out there so close to our houses. A crazy evil act that only our big horses were witness to."

Sadly, she told the court, the Waitati community had been forever tarnished by bloodshed.

"This is not the sleepy seaside settlement we all feel good about. A horrible, unimaginable brutal crime affected everyone in the village, and the nation, and the globe. This tragedy belongs to all of us," Mrs Mayhem-Bullock said.

In the weeks after the attack, her son slept with a baseball bat beside his bed.

Her daughter, convinced Star would recover, was also devastated by the loss.

"I couldn’t believe someone could do something so awful to an adorable wee pony," she said.

Ozanne’s letter of apology was read in open court but its contents provided little solace for Mrs Mayhem-Bullock.

‘‘I don’t believe anything he says," she said outside court, backed by a vocal, banner-waving group of supporters.

On the evening of February 17 last year, Ozanne entered a paddock by Pitt St where Star was tethered for the night.

He was armed with a ‘‘sharp object’’ and focused his frenzied attack on its back, neck and throat, according to court documents.

During the attack, Star’s tether was cut and he was found in the early hours of the following morning by a dog walker, who alerted authorities.

The horse was taken to Invermay for emergency treatment, but succumbed to the extensive wounds he had received a couple of days later.

Judge Crosbie said such entrenched issues meant the man’s prospects of imminent rehabilitation were not strong.

Ozanne was disqualified from animal ownership for 10 years — the maximum period allowed.