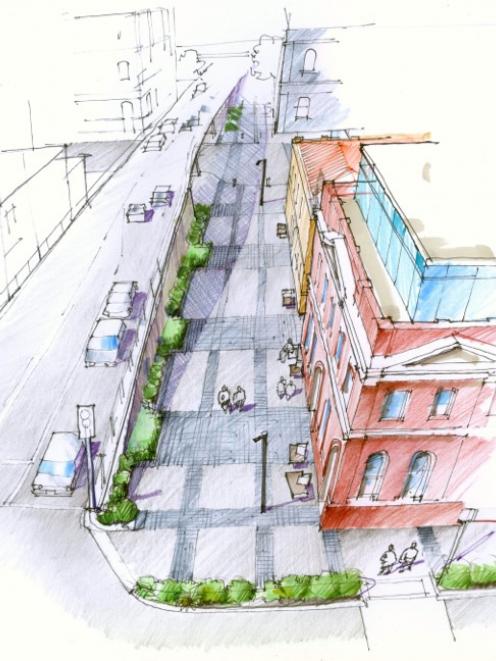 The proposal, subject to public consultation, calls for two one way sections of Jetty St below the Cumberland St overbridge to be closed to vehicles later this year.

Bollards would be installed to block vehicle access to the narrow one way streets, which intersect with Vogel St between Cumberland and Crawford Sts.

The spaces would then be converted into a safer and more welcoming area for pedestrians, as part of ongoing efforts to encourage redevelopment in the precinct.

A report by council urban design team leader Glen Hazelton, to be considered at today's meeting, outlines the plans and recommends endorsing the proposal for public consultation over the next two months.

The closure had been requested by two building owners in the area, and supported by others, with work to be carried out by the end of this year as part of the next stage of revitalisation efforts. The improvements would include creating ''one consistent surface level'' along the former roads, new paving, lighting, seating and plantings, to lift the look and feel of the area.

The area under the Cumberland Vogel Sts section of the overbridge would also eventually be home to a new public art installation, he said.

''The intention is to transform the area under the bridge from a barren space used for informal car parking to a space that contributes to the vision of the warehouse precinct as a vibrant and compelling destination.''

It also aimed to address traffic safety concerns in the area, including ''rat running'' by some motorists across Vogel St, which threatened the safety of cyclists and pedestrians, he said.

Service vehicle access to three buildings in the Vogel Crawford St section would be retained, but only at restricted hours.

Motorists would also still be allowed to use Vogel St, but steps would be taken to encourage slower speeds, he said.

The cost of the changes was not yet known but would be covered by the council's $500,000 budget for the next tranche of amenity improvements in the precinct, Dr Hazelton said.