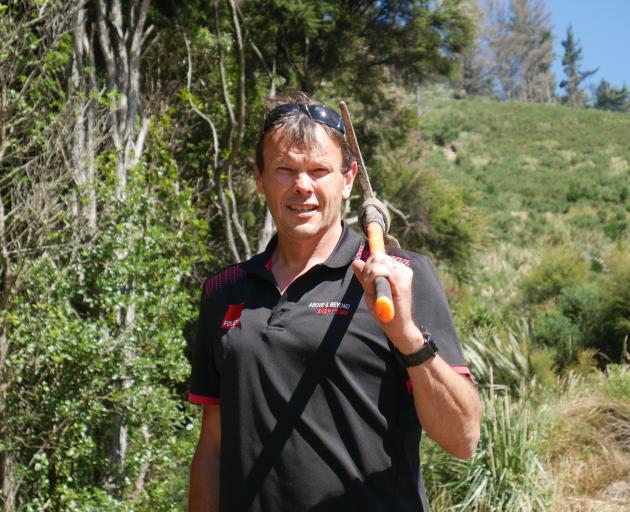 Mike Croucher is the man behind most of the Signal Hill tracks. PHOTO: JESSICA WILSON
In a series, The Star reporter Jessica Wilson aims to highlight unsung heroes of Dunedin’s sporting community. This week, she talks to track builder Mike Croucher.

If you are ever looking for Mike Croucher, he is probably on Signal Hill.

Croucher has been building and maintaining tracks on the hill for about 10 years and is up there about four times a week.

He even started a group called ‘‘Sig Digs’’, which meets weekly.

Mountain Biking Otago president Kristy Booth said Croucher was the man behind most of the tracks on the hill.

‘‘He can be found most days tinkering away at the track,’’ Booth said.

Croucher spends a lot of his time building easy tracks for lower›grade riders, as many of the downhill tracks were too fast for some.

‘‘It introduces people to Signal Hill because the reality is without the likes of the Plus One and the Double Glazed people would probably get scared off the hill, because there is only one option which is The Big Easy.’’

Plus One was initially called The Mrs, after Croucher built it for his wife.

The original name, as well as The Mistress and The Ginger Cougar, were deemed inappropriate by the Dunedin City Council last year and the club had to change it.

For Croucher, the meaning behind the track was lost.

‘‘I was really disappointed.’’

When it came to knowing what made a good track, Croucher said it was all about the rider and their preferences.

Some liked a fast downhill track with tight corners and big jumps, whereas others liked a more undulating ride.

‘‘For me a good track is one that gives you value for money because it’s a good half an hour ride up the hill.

‘‘I don’t want to spend half an hour riding up to ride down in four minutes.’’

While he was still in pursuit of the perfect track, his favourite was Double Glazed.

‘‘I like that because you’re in the natives and it shows you parts of the hill you would not normally see.’’

Although Croucher spends far more time digging than riding on the tracks, he still manages to get out once or twice a week.

He praised Mountain Biking Otago members for the work they did on the hill.

‘‘The Big Easy is an asset to the community.’’