King’s boys prove masters of the rolls in fundraiser

By Molly Houseman
0 Comments
Forty-four thousand cheese rolls in one room may sound like a dream.

But at King’s High School yesterday, it was reality.

About 40 pupils, parents and teachers spent close to 12 hours rolling the bread and cheese, fulfilling pre-orders to raise money for the school’s rugby First XV team. 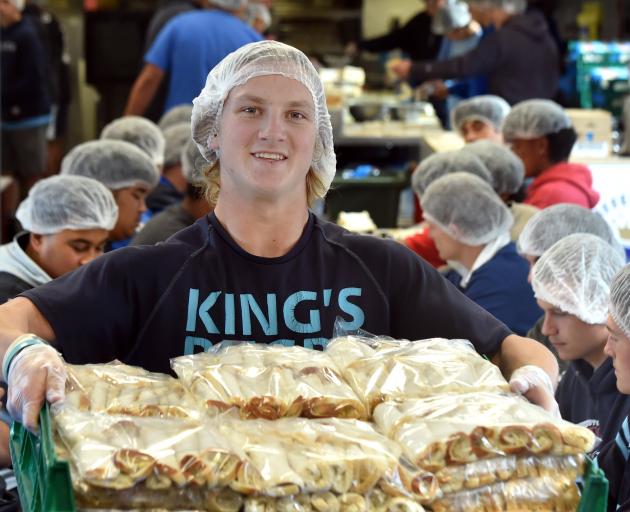 Holding some of the 44,000 individual cheese rolls made at Kings High School yesterday is pupil Michael Flanagan (18). PHOTO: PETER MCINTOSH
The funds raised will help pay for the yearly costs of the First XV programme, which could be up to $25,000.

Deputy rector Darin Smith said while it was a long day for the boys, there were important lessons learned through "mahi".

"We want our boys to be working hard, not expecting that their parents or their caregivers are always going to be the ones who write that cheque.

"There’s a wee bit more satisfaction out of actually doing a bit of hard work for yourself, leading towards what is going to be a really important year for the boys."

The work was also an important chance for the team to practise working through challenges together, Mr Smith said.

"There’s going to be times during the course of the season when they’re playing that they’re going to be relying on the guy alongside of them and this is what this stuff is about, that trust."

The first official game for the team will be an inter-school match against Waitaki Boys' High School in Oamaru next week.