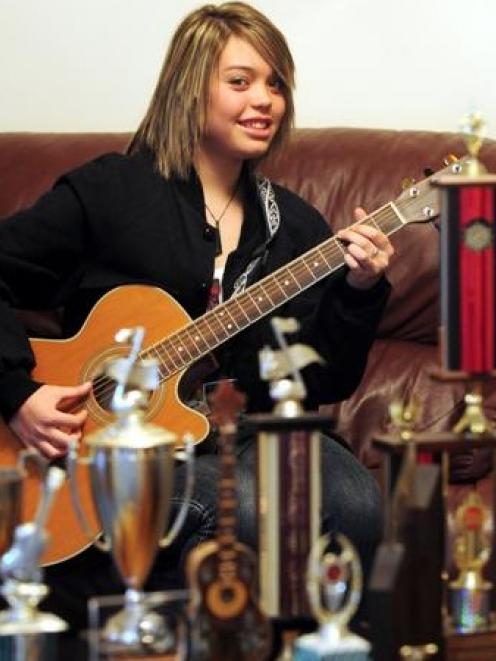 Dunedin musician Kylie Price (14) strums her six-stringed pride and joy and surveys her trophies. She dreams of becoming a professional country singer and already has her career path mapped out. Photo by Craig Baxter.
The truth is out there - and according to Kavanagh College pupil Kylie Price, it comes in the form of country music.

"I love the stories that the songs tell. It's the truth written up. If you put three chords to the truth, you've got a country song," she reckons.

Kylie (14) has amassed a multitude of trophies. In the past 12 months alone, she has won 16 trophies and a guitar at country music awards around the southern region.

Kylie started playing guitar at age 7 and began singing lessons at age 11. At an even younger age, she said, she knew it was inevitable that one day she would become a country music singer.

"For as long as I can remember, Dad has always had country music on in the car when we go somewhere. He's a real fan of Jade Hurley. For me, country is in the blood."

Country music is not her only claim to musical fame.

She sings in choirs and recently played the lead role of Rusty in Kavanagh College's production of Footloose.

Country music was such a priority that Kylie said she seldom did her homework before she had completed two hours' singing practice. It was rare for a day to go by when she did not play her six-stringed pride and joy.

"I'm happy as long as I have my guitar."

On a recent trip to the Philippines to visit her mother's homeland, Kylie decided to leave her beloved guitar in Dunedin to reduce her luggage.

After a day, she missed it so much she asked a stranger playing a guitar on the beach if she could "just play a few chords".

A couple of hours later, she was found by her family sitting in a hammock on the beach, still plucking chords on her new friend's guitar.

Kylie said her immediate dreams were to perform with country legends like the Topp Twins, Kerry Underwood and the Rascal Flatts Band.

In the long term, she wanted to go to a performing arts school in Australia and become a professional country singer in the United States.

First, she had to win the coveted Gold Guitar Awards in Gore on Queen's Birthday weekend.

"This year, I have chosen my songs more carefully. If I choose something I can relate to, my chances of winning will be better."

Kylie said the Gold Guitar Awards were all that stood in the way of her becoming a professional country singer.

"I can't move on to anything bigger until I win the Gold Guitars. Once I've done that, I can compete at the Tamworth Country Music Festival in Australia."

That, she said, was where the really big names in country music were made.