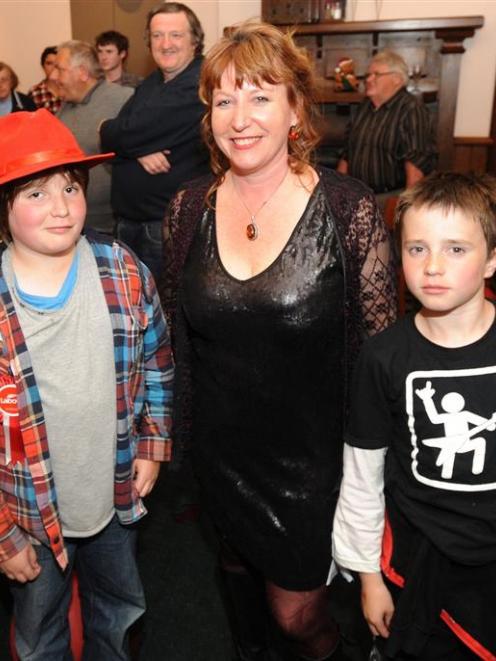 Clare Curran with sons Callum (left) and Riley on Saturday night. Photo by Craig Baxter.
Dunedin South MP Clare Curran is back for a second term in Parliament, but says she will study the numbers after seeing her majority slashed and party vote usurped by National in the traditional Labour stronghold.

That was also a dramatic turnaround from 2005, when former Labour incumbent David Benson-Pope enjoyed an almost 10,000-vote majority.

However, the real shock came in the Dunedin South party vote, where National polled 13,190 votes to Labour's 11,429.

Ms Curran, celebrating with about 50 campaign volunteers and supporters at Robbie's Bar and Bistro in South Dunedin, said Dunedin South voters sent a "clear message" they wanted the seat to remain with Labour.

The party vote was a different situation, and she said she could not yet explain the result.

"I don't know the answer. I think it's probably best to have a bit of a think about that and for the party to analyse what the implications are," she said.

She praised the efforts of her team of volunteers and supporters for the "grass roots" campaign.

Mrs Hayes, celebrating with about 100 volunteers and supporters at the nearby Kensington pub, was both ecstatic and "surprised" by the result.

She had aimed to run a "really strong" party vote campaign, and try to halve Ms Curran's electorate majority, and Saturday's results left her claiming victory on both counts.

At 64 on the National Party list, Mrs Hayes - a consultant in the health sector - missed out on a seat in Parliament.