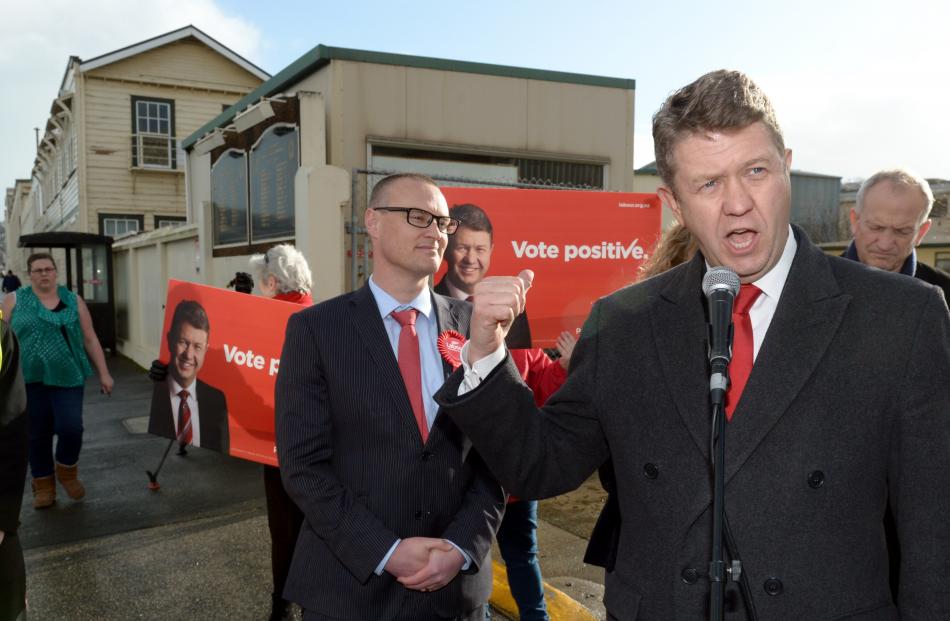 Labour, if elected, will invest millions in Dunedin manufacturing and fast-track the Dunedin Hospital rebuild in a bid to restore the city's fortunes, leader David Cunliffe promised on a visit to the city yesterday.

The Hillside Engineering Workshops in Dunedin would be reopened using about $5 million from a new regional development fund, Mr Cunliffe told cheering union and party members gathered at Hillside Rd for the announcement yesterday afternoon.''

We're going to do it here, we're going to lead the way. Let's go, let's make a positive future for Dunedin and Otago,'' Mr Cunliffe said.

Labour says more than 2000 of New Zealand's 3000 flatdeck wagons still need replacing, and the ones sourced from China have been of low quality.

Hillside would be reopened as a ''boutique'' short-run rail manufacturer, and KiwiRail's South Island base for heavy engineering and maintenance.''

We're going to work through a process whereby the Crown helps make investments in this plant that will allow it to regain its position of being at the heart of Dunedin's manufacturing sector.''

The ''positive plan'' for Dunedin would also save AgResearch's Invermay campus from the scheduled downgrade in 2017. The agricultural research centre, which is set to lose most of its more than 100 jobs when its genomics team shifts to Lincoln, was important to Dunedin as a knowledge and research centre.

You know you need to come home to vote positive and party vote Labour on the 20th of September,'' he told a cheering lunchtime public meeting of mostly party faithful. Dunedin Hospital would be rebuilt ''as a priority'', with an estimated price tag of $250 million.''

No more leaky operating theatres, no more rundown buildings. Dunedin Hospital's going to regain its place as a jewel in the crown of the health system of New Zealand,'' he said.

''They used to call Dunedin one of the four main centres. They will again under Labour.''

Building work would start in Labour's first term, the hospital retaining its full status as a tertiary-level teaching hospital. A Labour-led government would work with new lessees at Hillside, and the city's engineering cluster, to rebuild the workshops. Under new procurement rules favouring local firms, the workshops would be more likely to win tenders for wagon building, and would also undertake other engineering projects.

At his announcement outside the workshop, Mr Cunliffe was challenged by one of the new lessees in the facility, Paul Hickey, who was worried about the future of his steel business if the workshops reopened. In response, Mr Cunliffe said existing lessees would be consulted in the redevelopment of the site.

In a tightly packed day, Mr Cunliffe spoke to University of Otago students, the Otago Chamber of Commerce, party faithful at two choreographed events, and greeted the public at the Meridian mall and in South Dunedin.

A burst of hail dampened enthusiasm at the public walk in South Dunedin, but Mr Cunliffe popped into a couple of businesses to meet shopkeepers.

Mr Cunliffe said the two Dunedin Labour MPs, Clare Curran and Dr David Clark, had been ''relentless'' advocates for a fast-tracked Dunedin Hospital, and Ms Curran's advocacy of Hillside had been ''awesome''.

The Government has also said it will rebuild Dunedin Hospital, and earlier this year Health Minister Tony Ryall said he expected the Cabinet to consider a business case for the project next year. Recently, the Southern District Health Board told the Otago Daily Times a rebuilt hospital was eight to 10 years from completion.

Mr Cunliffe said he could not give a time frame for a rebuilt hospital, but the project would be fast-tracked, and would happen more quickly under Labour than National. Yesterday, National issued a press release in response to Labour's promise of 3000 new Otago jobs by the end of the first term, saying the region was capable of more.

Economic development spokesman Steven Joyce said 3000 jobs would represent a slowdown on job growth achieved in the past five years.

''In the last five years, our policy mix has seen 23,000 extra jobs created in the Otago region according to Statistics New Zealand. That's an average of 4600 jobs a year,'' Mr Joyce said.