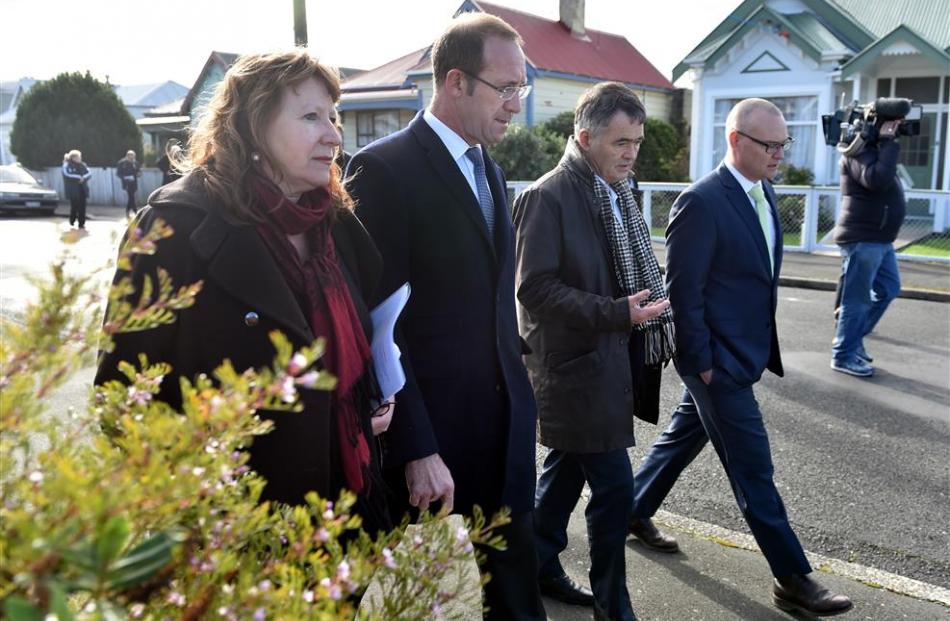 The group walked from Bathgate Park School, in Macandrew Rd, down Loyalty St into Nicholson St and on to Nelson St before returning to the school. They were accompanied by members of various social groups from South Dunedin.

Speaking after the tour, Mr Little said the area was a "prime candidate'' for urban renewal under the party's proposed Affordable Housing Authority.

Labour, if elected next year, would pour $100million into the authority to tackle housing affordability by building affordable houses, cracking down on speculators and fostering urban renewal projects.

Renewal of South Dunedin could be completed in 9 to 12 years, Mr Little said yesterday.

"It's not going to happen overnight,'' he said.

"We'll have a three-year ramp-up period.

"We would want to be showing good progress after two terms [of government] and completing the process after three or four terms.''

Mr Parker said the answer was not to retreat or abandon the area, but to develop a "vision'' for South Dunedin.

"One of the things that we would like to come out of a vision for South Dunedin is to create some certainty as to what will happen here over the next decade or so,'' he said.

"The solutions to the various challenges are complex and they all have to be worked through,'' he said.

"All of these things will have to be addressed by the council and the Affordable Housing Authority.

Last June's floods had brought the struggles of South Dunedin's residents into focus and its residents deserved answers, he said.

"No-one is talking about retreating from South Dunedin or abandoning it. But there is a need for a plan for South Dunedin for future development.''

Mr Cull said the council would work with any government planning to address the challenges faced by South Dunedin.

"This is an appropriate place to have an urban renewal scheme because as we know we have got some of the oldest housing in the country,'' he said.

"If there's going to be urban regeneration, it has to be a partnership between government and local interests as well.''