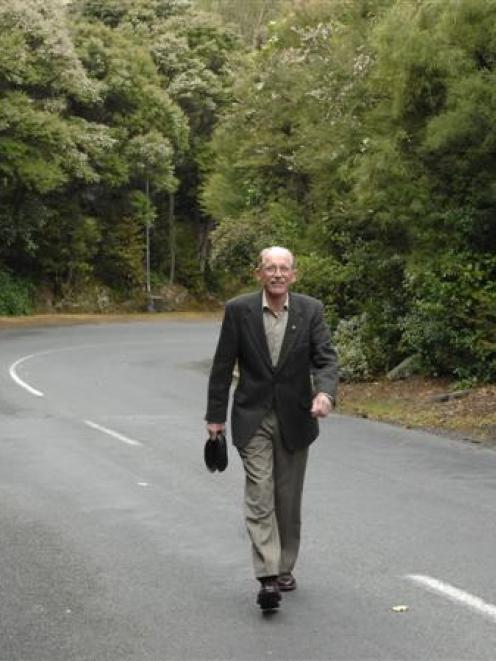 Lovelock Environment Society secretary Dr Antony Wood on Lovelock Ave, a road he wants retained as it is. Photo by Linda Robertson.
Opponents of the Lovelock Ave realignment say they will return to annual plan hearings in May to restate their opposition to the project, but are wondering why they were not listened to the first time round.

They have also questioned what more they can do to convince the Dunedin City Council of their argument.

At an annual plan meeting on Thursday, serious doubts emerged among some councillors about the project.

With the pressure on to cut a rates increase standing at 6.4%, the 1% saving that could be achieved by not spending the $1 million cost of the realignment could prove an enticing option for councillors.

The plan to realign Lovelock Ave, to allow more room for the Rhododendron Dell and relocation of propagation houses and administration buildings, and deal with safety issues related to the road, is supported by the Friends of the Dunedin Botanic Garden.

Opponents, mostly Opoho residents, have fought the project as it has gone through council, then resource consent processes.

Their opposition looked lost late last year, after Lovelock Environment Society secretary Dr Antony Wood announced in December an Environment Court challenge by the group, set up to oppose the realignment, had been dropped, because of its expense.

But at Thursday's meeting, the council decided to listen to the public's views on the issue one more time, at annual plan hearings in May.

Cr John Bezett suggested if residents organised themselves the way Judith Medlicott and Town Hall Harrop St extension opponents had, they might be able to stop the plan.

Dr Wood said yesterday he would attend the May hearings.

"Obviously, we will be wishing to make sure we put before the councillors the issues that are involved."

It was difficult, though, to see how residents could be more organised.

They had organised petitions and turned up in force at hearings with researched arguments against the proposal.

He questioned Mayor Peter Chin's suggestion consultation had already been properly done on the project, and said the council's consultation processes needed to be reviewed.

Civil engineer and Opoho resident Errol Chave said he was "interested and a little heartened" by the news of the councillors' decision, but he was tired of fighting the proposal.

"Councillors presently have a very serious duty of care to ensure that the financial burden for Dunedin's citizens, now and in the future, is properly managed and minimised.

The rejection of the proposal to close Lovelock Avenue brings an immediate saving in excess of one million dollars," he said.

He fully supported a properly assessed and managed development of the Botanic Garden, but said a disciplined assessment of the need for the development could result in further economies.

Council community life general manager Graeme Hall said yesterday $232,000 had been spent so far on the planned $5 million Dunedin Botanic Garden strategic development plan, of which the realignment was part.

A "substantial" report on the issue would be needed.

Friends of the Botanic Garden president Frank Buddingh said he would meet committee members early next week to discuss the issue, and he was unwilling to comment until that had happened.