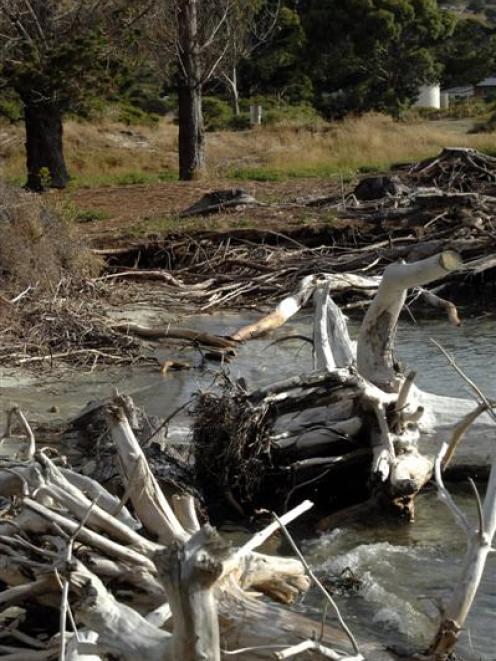 Erosion at Te Rauone. Photo by Linda Robertson.
A last-minute bid to increase the Dunedin City Council's share of funding for a rock breakwater to protect Te Rauone Beach, on Otago Peninsula, has failed.

Councillors at yesterday's 2013-14 draft annual plan deliberations voted against increasing the council's contribution to $80,000, after Cr Lee Vandervis said they would be effectively throwing money into the harbour.

Earlier this week, councillors had agreed to contribute $50,000 towards the cost of a breakwater and sand replenishment project in the area, following mounting concern over erosion threatening homes and the Te Rauone reserve.

Local landowner Te Rauone Incorporation had already indicated it could pay for half of the expected $160,000 construction cost and would take ownership and ongoing responsibility for the finished structure.

Port Otago would also carry out beach construction and ongoing replenishment work that would provide extra protection in the area.

However, that still left a funding gap to bridge before the scheme could proceed, which residents hoped would stop the erosion they say is eating away 1m of the shoreline in the area every month.

Yesterday, Cr Bill Acklin said the ''huge amount'' to be funded by residents in the area should be reduced, and suggested increasing the council's share to $80,000 so ratepayers paid half.

His push won support from Cr Richard Thomson, who said the council should be ''applying a degree of compassion'' to residents in the area.

That was despite technical concerns about the project raised by Tonkin & Taylor, which concluded the solutions offered only short-term fixes and would not prevent some erosion in the area.

However, Cr Vandervis said the report was clear - the project was a ''sop'' to residents and would be ''a waste'' of ratepayers money.

''You are paying an awful lot of money to throw truckloads of material into the sea to get washed away,'' he said.

Mayor Dave Cull said concerns about whether the project would work were ''a day late'', as councillors had already decided to contribute.

The discussion was about whether to increase that contribution, which he did not support, he said.

Deputy mayor Chris Staynes did not support the increase, saying instead it was hoped ''synergies'' with road widening and seawall work planned in the area could reduce the total cost, and therefore the community's share.

The council also had to be cautious, as it was likely to face more, similar issues along the coastline in the years to come.

Cr Jinty MacTavish agreed those synergies should be investigated first, while Cr Kate Wilson warned the extra funding would increase the council's contribution to more than the value of the council reserve it sought to protect.

She also worried councillors could be ''opening the door'' to further claims, including from farmers along the Taieri River whose land was already being undercut.