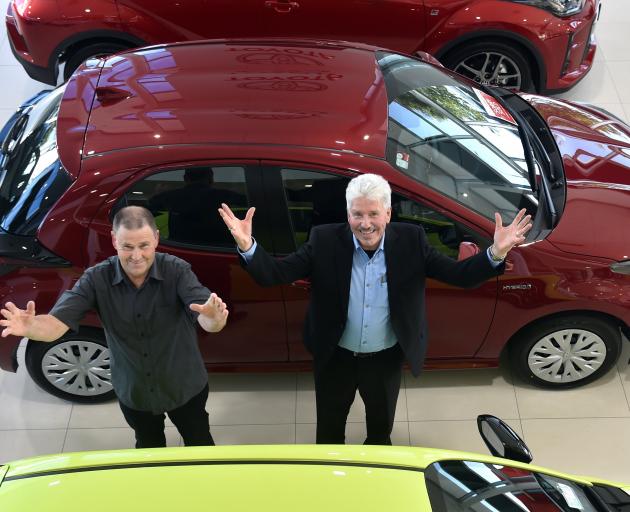 His friend and co-worker, technician Garry Ferguson (65), signed off for his last time at the end of last year, after 37 years.

The pair had followed each other through Otago Polytechnic, into their Cooke Howlison careers and now into retirement.

Mr Ferguson and Mr Steel sat together at polytechnic in their early 20s and went on to start at the company in the 1980s, when it was Wrightcars, as mechanics.

They agreed it was their love for the products — Toyota and Lexus vehicles — the people and working for a company that was community-minded that kept them in the job for so long.

Mr Steel said it also helped that they both had had a passion for cars since they were "knee high" and a big interest in motor racing.

As Mr Steel prepared to leave work for the last time yesterday, he said he had a "wonderful sense of achievement".

"I feel like I am leaving the industry at a good time, where sales have been frenetic for the last couple of years.

"[The company] has been No 1 in Otago for many years."

As for retirement, he was looking forward to spending part of it restoring a motorcycle and finishing building a car.

Mr Ferguson has already had a bit of practice at retired life, after leaving before Christmas last year.

"It was hard — not having to get up at a certain time and come to work," he said.

His plan now was simply to relax, which he had been enjoying so far.

There was no doubt his and Mr Steel’s friendship would continue into retirement.

"We’ve been good friends all the way through," Mr Ferguson said.

Soon to follow Mr Steel and Mr Ferguson is new vehicle consultant Fred Donaldson, who is set to retire later in the year after 40 years with the company.