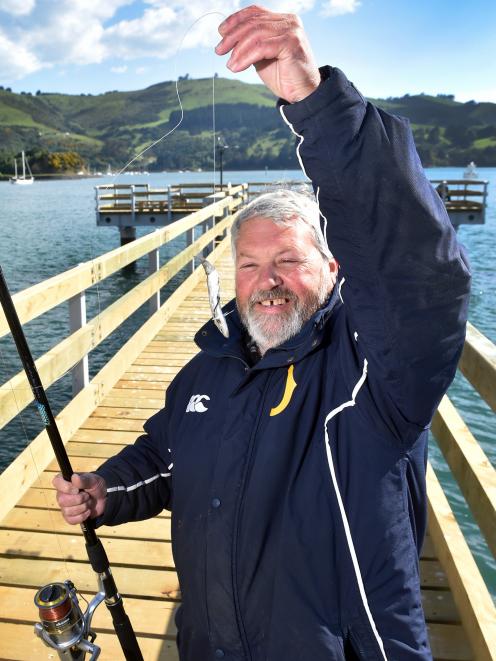 Dunedin resident Keith Malcolm (59) grew up in Port Chalmers and has heard roosters crow plenty of times, having been regularly fishing — often just from the rocks — on and near Boiler Point for more than 20 years.

Even if he catches little or nothing, he still finds fishing a great way of getting away from it all.

Mr Malcolm made his first visit to the Port Chalmers jetty in darkness, using a torch, about 3.30am on Saturday, the morning after the new wharf became available for public use.

He was one of only two fishermen there shortly after 9am, but gives the new structure a big thumbs-up.

He predicts it will be popular with anglers, including flocks — or shoals — of youngsters during the long summer holidays.

The wharf will be good for catching all native fish species, as well as salmon, the ultimate prize, he thought.

Mr Malcolm agrees that being able to cast directly into the channel for the first time is a key benefit.

Having geared up with a new 3m-long telescopic fishing rod, he had already caught a couple of barracouta, about a metre long, by about 9.30am.

"It’s quite good to come down here — you’re at peace and it’s nice and quiet.

"I see the sun come up every day.

"I heard the rooster crow this morning about 5am.

"I see five or six fishing boats going out."

And he waves to passing cruise ships.

When he wants to get away from life’s day-to-day cares and woes he goes fishing, usually from early morning until about 9pm, several times a week.

He nips home for tea, and meanwhile, there’s his water bottle and a snack bar to keep him going.

Whenever he has caught a salmon in the past, he has given it away to others who had more need of it, and if he catches nothing "that’s a day for the fish".

"I leave the cellphone in the car and don’t worry about time."