Long-lost journal will stay in NZ 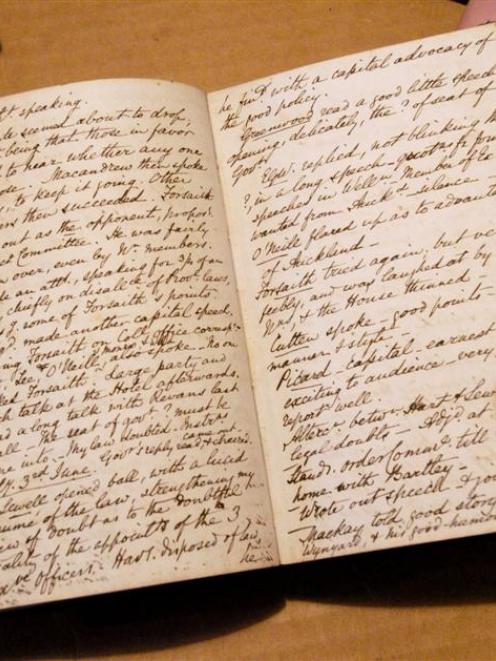 Malcolm Moncrief-Spittle said in early reports yesterday he hoped to sell the Wakefield journal overseas for a five figure sum, but yesterday afternoon, he told the Otago Daily Times that, having subsequently checked further on the contents of the Protected Objects Act, he had changed his mind.

He had been in recent email correspondence with the Alexander Turnbull Library and was happy to sell the journal within New Zealand, but was still seeking a sum "in the low five figures".

Alexander Turnbull officials said the manuscript could not be exported without the permission of the Ministry for Culture and Heritage, given restrictions under the Act.

Dunedin historian and author Philip Temple said it would be "absolutely absurd" if the journal was lost again by being sold overseas.

Edward Jerningham Wakefield was the only son of Edward Gibbon Wakefield, who was instrumental in the development of the New Zealand Company and was the driving force behind much of the early colonisation of New Zealand.

The journal, covering 1850-58, was missing for about 100 years before it came up for auction in Dunedin last year.

The London-born Edward Jerningham Wakefield accompanied his uncle, Colonel William Wakefield, to New Zealand on the New Zealand Company ship Tory in 1839, seeking a site for a colony in the Cook Strait area.

Jerningham Wakefield later returned to London, where his book Adventure in New Zealand (1845), giving an account of early colonial life, was published.

He came back to New Zealand in 1850, twice serving as a parliamentary representative for the Christchurch area (1853-55 and 1871-75) and also representing the City of Wellington on the Provincial Council (1857-61).

Mr Temple, who wrote an award-winning biography of the Wakefield family - A Sort of Conscience: The Wakefields - knew the journal existed but was unable to locate it when he was researching the book.

He wants the journal to stay in New Zealand.

The work was a taonga (treasure) that was about 150 years old and belonged in this country, preferably at a major public institution such as the Alexander Turnbull Library, he said.

Mr Temple also hoped the discovery of the journal could result in other papers previously belonging to Jerningham Wakefield also coming to light.

Jerningham Wakefield's later life was dogged by alcoholism and he died, penniless, in Ashburton in 1879.

The journal's text is being published as a limited edition book by Dunedin's Kilmog Press early next month.