Lime scooters at Logan Park. PHOTO: PETER MCINTOSH
Debate has been raging recently around the health and safety issues of the citrus-based electric scooters that have populated the streets of Dunedin. Nobody has yet concerned themselves with the identity issues faced by riders. That changes now.

I was crossing the intersection of Stuart St and Cumberland St. I was on an e-scooter.

The lights changed to allow pedestrians to cross, and I set off, a gentle kick setting me in motion and the lightest stroke of the little lever by the hand grip providing the most wonderful electric boost.

It was then I saw the white people-mover turning right towards me.

In my mind I was an honorary pedestrian.

The driver didn't see it that way.

In his mind, quite clearly, bubbled a mixture of aggression and confusion, a deep-seated fear of the new, a caustic miasma of blind hatred of what he saw as "the other" at any point in his cruel little life, and he hurtled towards me with a look of rage, jamming on his brakes at the last minute to prove a point and send a message.

He didn't think I was a pedestrian.

The e-scooter experience is one that challenges your identity at every step.

That might, for instance, be a carefully constructed image of oneself as a mature, sober, responsible member of the community, a member wary of unrestrained joy, someone who casts withering looks at the likes of the young who hoot and yell with wanton recklessness to express whatever facile version of joy they happen to be pretending to experience. 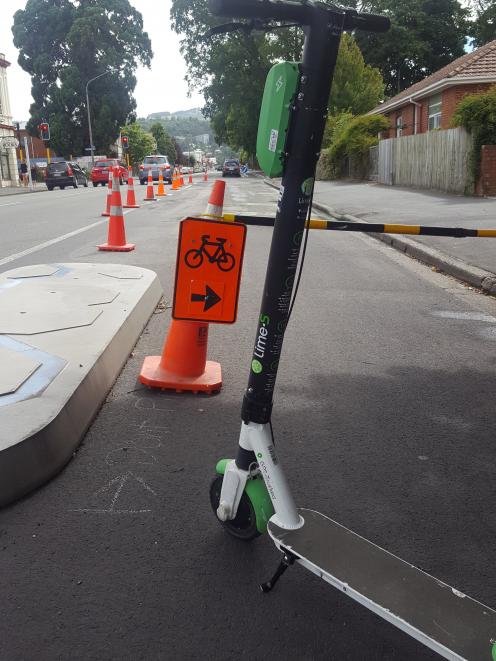 A barrier on the cycle lane. DAVID LOUGHREY
That image may be clothed in the most sombre tones, may wear sensible shoes, may be well groomed and may even have a neat crease in its pants.

But that can change when an e-scooter is located on an app that shows them huddled at every corner on every city street, lining the avenues and alleyways of South Dunedin, clinging to the hills of Mornington or lying lost and lonely in Andersons Bay.

There is one nearby.

A gentle kick sets you in motion, the lightest stroke of the little lever by the hand grip provides the most wonderful electric boost, and in moments you are flying, carving a path deep through the city's cycle lanes, heading north, a battery-fuelled highwayman on speed, a desperado, a punk rock pedestrian with no limits who laughs in the face of perambulation, who calls it old technology.

You could sing if you wanted, sing an opera, even though you don't know any, as you streak through the streets.

You are sober no longer.

But it doesn't take long before more questions arise.

For a start, even at warp speed, you can still see the white painted outlines of bicycles flick beneath your feet as you rocket along the cycle lane, and it doesn't take long before you start wondering if you are in the right place.

You catch up with the slower members of the cycling community, they separate from the pack like the weakest gazelle, and you hunt them down and pass them by.

Then you come upon some minor work on the cycle lane and there is a yellow and white barrier blocking your path with a little bicycle icon and an arrow showing where you are meant to go, but does it mean you?

Should you even be on the cycle lane?

You keep up with cars and trucks on the one-way, but you are not one of them either, those lumbering heavy-metal behemoths that clog the city's arteries while you fly along in a virtue of carbon neutral good conscience.

You see the footpath; the footpath where the slow people take cruise ship walks hardly faster than being stopped, where students in small packs weave from side to side, where the very young gambol unpredictably in the sun as skateboarders rumble through them all.

Is that where you should be?

On an e-scooter, on a cycle lane, you inevitably find yourself stopped where the lane merges with the road, behind a car stopped for the lights.

Can you, at this point, abandon the pretence of being, however loosely, a member of the cycling community and accept your place among the cars?

Or - and this would be a big call - should you roll shame- facedly over the gutter on to the footpath, join the peds and use their crossing before sliding back on to the cycle lane and letting rip?

And then, finally, the cycle lane runs out, and you end up on the footpath anyway because the road is too dangerous, but you have to use the road now and then to get around groups of people or to cross from one side to the other, and you realise you're in the midst of a very serious identity crisis, because you really have no place to be, no home where you are welcomed or even properly accepted, and you're neither pedestrian, driver nor cyclist.

But maybe that's the thing.

Out there on the edge you have found the ultimate freedom.

You are all but none of them; you're a rebel and a maverick, you don't need any labels and you wouldn't belong to any group that would have you, such is your fierce independence.

You're you, on two little wheels, flying silently into an untamed future with a clean conscience and a wild sense of adventure.

Hey, do Lime have public liability insurance to cover injuries to third parties? Answers on a postcard please.

It's not the behemoths. It's the leviathan, a big boozer.

So, as i understand, you took off on the green pedestrian light, which means that for at least five seconds or so the vehicles that would have crossed your path would have had a red arrow.

So if this motorist ignored the red arrow this makes perfect sense - as in this city red means carry on, instead of stop/stay stopped. So you merely interrupted their usual hobby of illegally running red lights.

The Memorandum of Understanding with the DCC requires Lime to have public liability insurance. But that sort of insurance isn't the really relevant one: ACC is what Lime should be paying