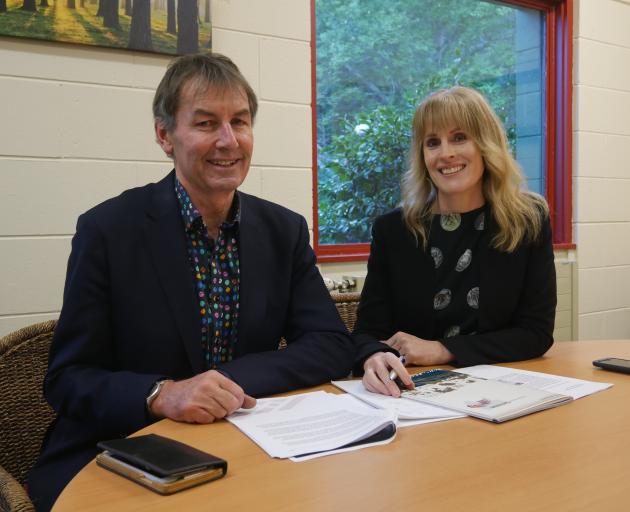 Logan Park High School co-principals Peter Hills and Kristan Mouat. The school was selected to be part of a Education Review Office report which focused on ‘‘What drives learning in the senior secondary school?’’ PHOTO: JESSICA WILSON

A Dunedin high school is one of 12 in the country chosen to be part of an Education Review Office report.

Following its positive ERO review last year, Logan Park High School (LPHS) was invited to be part of a report about "What drives learning in the senior secondary school?''

ERO staff returned to the school to investigate how teachers adapted the curriculum to suit their pupils.

The report stated schools were selected because they had made clear connections between their curriculum and the key competencies of NZC (the New Zealand Curriculum) in their school documentation.

LPHS's approach to curriculum delivery was student-centred, inclusive and flexible, it stated.

Co-principal Peter Hills said rather than getting pupils "bogged down'' in assessments, the school wanted to produce pupils who were "happy, well-rounded contributing members of society''.

They did that by creating a culture where pupils value and engage in learning.

"We think it's right to focus on growing young people,'' Mr Hills said.

Employing teachers who were passionate about their field was also important.

Co-principal Kristan Mouat said the curriculum allowed schools to have a lot of freedom when designing each course as it was important for pupils to enjoy what they were studying, rather than just focusing on getting enough NCEA credits.

It was about "keeping alive that love of learning as well as helping [pupils] though those assessments''.

Ms Mouat said the teacher-pupil relationship was important, as teachers aimed to really get to know the pupils.

They could adapt the curriculum so pupils could get the credits they needed by doing something they enjoyed and were good at, she said.

The school was "trying to create a culture where everybody can find their place and reach their potential''.