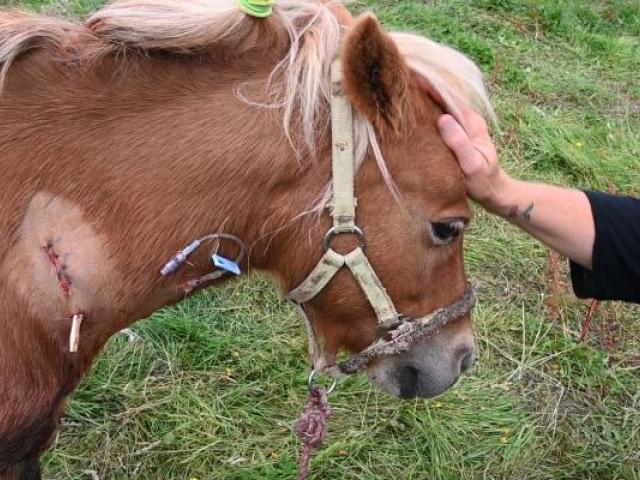 The alleged attack on Star is thought to have happened about midnight on February 18 in a Waitati paddock. PHOTO: ODT FILES
A man who allegedly stabbed a miniature horse 41 times has denied the charge against him and will maintain name suppression for at least two more months.

The 49-year-old appeared in the Dunedin District Court yesterday accused of "willfully ill-treating an animal, namely Star the miniature horse, by stabbing it multiple times, causing it to die".

Defence counsel Deborah Henderson pleaded not guilty on her client's behalf and elected trial by jury.

She applied for continued name suppression to protect her client's fair-trial rights, which was granted by Judge Kevin Phillips.

She said the case had attracted nationwide coverage and publication of the man's name might affect a potential jury pool.

The issue of identity would be pivotal when the matter went to trial, Ms Henderson said.

She also said the defendant's child might be affected by publication of the man's identity, though the judge noted there was no information to support that.

The accused has been in custody since last month, when the charge was laid, and he was denied bail at his last appearance.

There has been no indication as to whether he will seek electronically monitored bail.

The alleged attack is thought to have happened about midnight on February 18 in a Waitati paddock near the corner of Brown and Pitt Sts while the horse was tethered to a fence.

The 10-year-old miniature horse was treated by a vet and survived through the day, but succumbed to its injuries the following day.

The defendant will be back in court in September.

The charge carries a maximum penalty of five years' imprisonment or $100,000.