Masked and vaxxed Santa Claus is coming to town 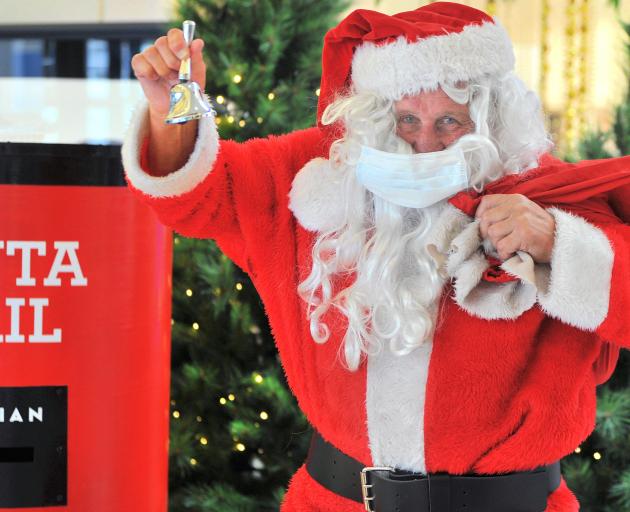 Santa will be making an appearance at the Meridian mall this year, complete with face mask. PHOTO: CHRISTINE O’CONNOR
A new addition will be made to Santa Claus’ famous red outfit this year — a face mask.

Even a pandemic will not be stopping Santa from bringing some festive cheer to Dunedin this Christmas.

A Meridian Mall spokeswoman confirmed the mall’s long-running Santa’s Grotto would be going ahead this year, albeit with a few changes in place.

There will be socially distanced queuing and one-way traffic, compulsory sign ins, Santa and his helpers will be wearing face masks, and photos will be set up to allow sufficient distancing from Santa.

Santa and his helpers will all be double vaccinated, the spokeswoman said.

‘‘We want to ensure that families will still get to have a Santa experience this year and we are committed to making this as safe as possible for
our community.

‘‘We do ask that customers stay away and get tested if they are feeling unwell.’’

Santa will also still be making appearances at Toitu Otago Settlers Museum during the Christmas holiday period, also with safety protocols in place.

A Dunedin City Council spokesman said that unfortunately meant children (and those young at heart) would not be able to sit as close to Santa as usual, but other arrangements would be in place to ensure people could still talk to Santa and have their photos taken with him.

All Toitu staff and visitors will also be required to follow all Covid-19 protocols, including scanning, mask wearing and social distancing.

But for those wanting to take their fur babies to get snapped with Santa, there will be a big change this year.

For the past several years, Nichol’s Dunedin Pet Centre has allowed people to bring their pets down to get photos with Santa, in exchange for a donation to charity.

Hundreds had turned out for the festive photo opportunity.

But due to gathering limits, Nichol’s was taking a different approach this year, marketing manager Chas Carroll said.

A Christmas cardboard cut-out would be appearing at locations around the South, which people could go and take photos with instead.