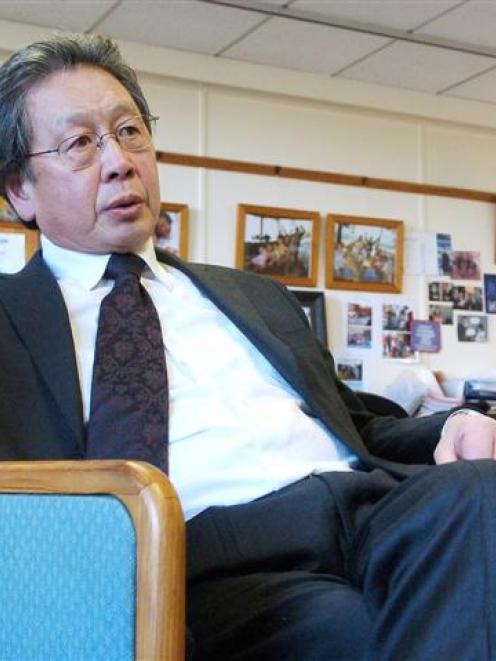 Dunedin Mayor Peter Chin responds to the mounting disapproval of his council. Photo by Gerard O'Brien.
The Dunedin City Council may be reeling from a barrage of criticism from an angry public, but Mayor Peter Chin says the decisions it has made to support major multimillion-dollar projects are the right ones.

Making no apologies for his council's direction, he said the evidence could be seen right outside his office in the Civic Centre.

"Look out the window. That's [floors being added to Otago House in Princes St] the only private construction of any size.

"If the stadium was not a project, if we hadn't completed Wall Street, if the Otago Settlers Museum upgrade wasn't there, if the town hall project wasn't there, there would be no construction activity in Dunedin.

"The city is playing a huge part, in this economic down-turn, to retain the building expertise in Dunedin, so that when the upturn comes, we're not struggling to find people with skill."

Mr Chin's views were delivered with more than a modicum of heartfelt passion yesterday, when he was asked to respond to criticism of his council.

Apart from the ongoing anger from many about the council's support for the Forsyth Barr Stadium, there has been outrage over parking changes in the city, anxiety about a new system of rubbish collection and a widespread view the council's consultation process is nothing but lip-service.

Membership of the Facebook group "The DCC has lost the plot", started by Dunedin musician Chris Keogh last month, had reached 2632 yesterday afternoon.

Asked whether he agreed the criticism was increasing, Mr Chin said through various media there was "a whole lot of criticism".

"I suppose over the past year or so, one kind of wonders, has the council done anything that's been any good?

"It seems to me that the only news that makes news is bad news."

Mr Chin was asked why he thought there had been so much criticism, including a comment written in the public feedback columns of the Otago Daily Times website - not the only sentiment of its kind - which described the council as "the most irresponsible council this city has ever seen".

Mr Chin said the criticism about parking and rubbish, for instance, was "because they have involved change".

With parking, there had been a submission process, both the public and business had been advised, and the strategy was approved by the council.

"To some extent, I think I would agree that the implementation of it was not necessarily done as professionally and as well as perhaps it should have been."

The parking system would be changed, and the council was working on that.

But feedback he got from people concerned was that they had not read the stories about the changes in the newspaper or in the council's City Talk magazine when the new parking strategy was being put in place.

"They said we don't care about that sort of stuff."

If people did not pay any attention, it was difficult for the council to do its work, he said.

Mr Chin was asked if the council had gone too far with its spending of hundreds of millions of dollars on various projects, the latest proposal being to move the Dunedin City Library to the former chief post office building in the Exchange.

On the library, he said there was no commitment to spend, only to investigate the opportunities.

"It's interesting you talk about spending. There's one spend the council has done which had no community authority through the long-term council community plan process or anything like that, and that was [buying] Harbour Cone."

There had been no public outcry about that, and there was no financial return to the council from buying it. And in the future, Mr Chin said, the council may well have to commit funds to other investments for "who knows what?"

Asked if he had a cogent vision for the city, he said he had lived in Dunedin all his life, and wanted to leave it in a better state than it was.

"This city has huge infrastructure and amenities that are better than any other city of its size," he said.

Its most important industry was the University of Otago, "and I want to promote this city by enabling it to develop in such a way the university continues to flourish".

Mr Chin said he wanted to leave a city rich in infrastructure, as previous generations had.

The settlers museum, the Dunedin Railway Station, the Chinese Garden and the town hall redevelopment all fitted into that thinking.

Asked about another criticism, that the council did too much in secret, he said he did not agree.

"The business of council cannot always be done in the open."

A simple example was dealing with a business that needed help.

"That's not stuff that should be on the front page."

He made no apologies for his leadership style.

"It all comes down to style. I am me, and I always have been me."

He agreed it would be preferable to have the backing of the ratepayers for what the council was doing.

"There are always ways to do things differently, and do things better."

Despite that, "This is my second term in office. I got re-elected, so I don't think I'm going to change my style."

On those who said the council did not listen to the public over consultation, Mr Chin said he was concerned if people were losing faith in the process, but it was a system that was evolving.

"I don't mean it in an unkind way, but people out there say `You are not consulting with me if you don't do what I want you to do."

He said the council did consult, but more and more, people did not read newspapers, did not read City Talk, and with radio and television only heard sound bites.

"I think we have a huge part of the community who basically don't have any understanding and don't care a great deal until such time as the actions of the council impacts them personally."