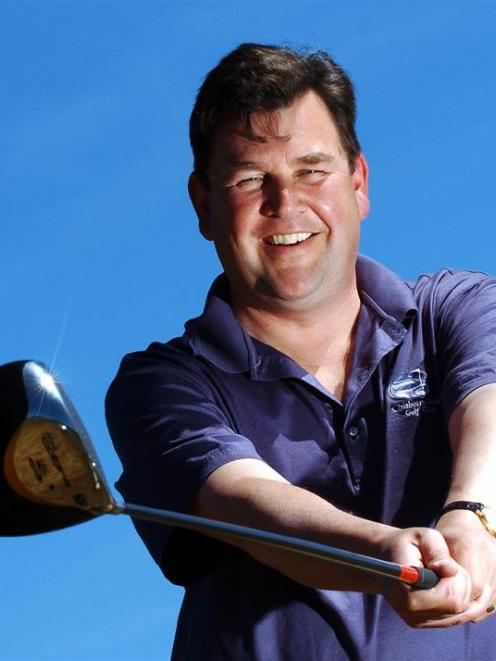 Chisholm Park golf professional Andrew Whiley says he is "seriously considering" standing for election next year, because of his frustration with the Dunedin City Council. Photo by Gerard O'Brien.
Dunedin Mayor Peter Chin is digging in and refusing to say why he ruled out formal action against a wayward city councillor, amid accusations of favouritism that could prompt a council challenge.

Mr Chin has written to Dunedin man Andrew Whiley, who laid a formal complaint over Cr Paul Hudson's behaviour in September, saying he would not refer the matter to the council's conduct committee.

The decision frustrated Mr Whiley, who yesterday told the Otago Daily Times he had been encouraged to examine legal options.

Instead, he was "seriously considering" running for council in next year's local body elections - prompted by Mr Chin's handling of his complaint and the council's handling of city parking and other issues.

"This council has been woeful on so much this year," he said.

He claimed Mr Chin had tried to protect Cr Hudson since the complaint was laid, and never intended to follow through with a formal process.

Mr Chin had also tried to talk him out of proceeding with the complaint during a face-to-face meeting in the mayor's office on October 13, Mr Whiley said.

"My formal complaint was never really going to get to a formal process. If it had been one of the other councillors it would have been a different situation," he said.

However, Mr Chin refused to explain his actions when contacted yesterday, and had a simple message for Mr Whiley when told of his possible council ambitions: "Good luck."

Pressed on why he ruled out a conduct committee investigation, Mr Chin would only say the council's written code of conduct provided the authority to do so.

"I have made my decision. I'm not going to go into any explanation.

"I stand by the letter I have written."

Mr Chin would not identify the clause authorising his actions, but it appeared to be a footnote allowing the mayor to "mediate a solution" without the conduct committee.

It was not clear whether mediation required the agreement of all parties.

A conduct committee had the power to order an apology or censure councillors, temporarily suspend them from committees or dismiss them from positions as chairman or deputy chairman of committees.

The code also required the mayor and councillors to "be as open as possible about their actions and those of the council, and be prepared to justify their actions".

Mr Chin's refusal to explain his decision comes after two other city councillors - Crs Teresa Stevenson and Michael Guest - were this year told to apologise to their colleagues after being referred to the council's conduct committee over breaches.

Mr Whiley's complaint came after an angry telephone conversation with Cr Hudson on September 24, the same day a man was found dead at Lawyers Head and days after Mr Whiley - the golf professional at nearby Chisholm Park Golf Club - argued against plans for a security fence at Lawyers Head.

He claimed Cr Hudson, during their heated exchange, suggested his public comments had contributed to the man's death.

Cr Hudson, chairman of the council's community development committee, was among councillors to vote in favour of reopening John Wilson Ocean Dr and plans for the fence.

Mr Chin's letter to Mr Whiley said he had exercised his discretion to mediate a solution with Cr Hudson, including a formal apology from Cr Hudson to Mr Whiley on December 7, which was the "appropriate response".

Cr Hudson had earlier written a one-line apology to Mr Whiley saying sorry "if I have offended you", but later told the ODT: "I don't feel an apology was necessary."