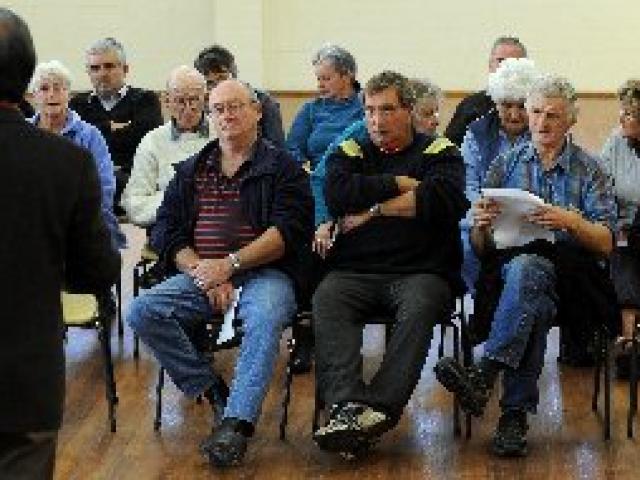 Wingatui residents intent on retaining control over the governance of Wingatui Hall were successful last night in approving a rule guaranteeing majority local representation.
Former Dunedin mayor Peter Chin is among a dozen high-profile New Zealanders who have been selected to oversee a review of the nation's constitutional arrangements.

The way Dunedin has developed its sister city links with Shanghai is a model for others to follow in fostering ties with China, New Zealand consul-general at Shanghai, Michael Swain, says.
Former Dunedin mayor Peter Chin will finish his role as the Gambling Commission chief gambling commissioner at the end of the year.

Former Dunedin mayor Peter Chin poured $43,446.40 into his failed bid to hold on to the mayoral robes, figures reveal.

My councillor experience of Mayor Peter Chin's mayoralty was that of a man with usually gentle manners who played the role of an essentially ceremonial mayor. He was proud of his record of...

Peter Chin may have lost the election but he appears to have rediscovered his sense of humour - and perhaps his joie de vivre - following Saturday's election results.

Dunedin city councillor Dave Cull appears to have surged ahead in the mayoral race as the 2010 local government election nears its end.

When Dunedin Mayor Peter Chin spoke to the final city council meeting earlier this month, his words read like a valedictory speech, a farewell from office, and such has proved to be the case.

Dunedin Mayor Peter Chin hopes history will be a kinder judge of the Dunedin City Council's achievements over the past three years than some of his outspoken critics.

What do you know about the candidates who are contesting Dunedin's mayoral campaign in the 2010 local body elections? Today, in the final Mayoral Profile, David Loughrey puts the questions to Dunedin Mayor Peter Chin.

Dunedin Mayor Peter Chin says he has his "loins girded" and is ready to advocate for retention of neurosurgeons in Dunedin should that prove necessary.

Two more Dunedin city councillors have confirmed they will stand again at the local body elections in October.

Dunedin is benefiting from the cross-cultural links provided by 11 overseas-born residents who became New Zealand citizens at a ceremony this week, Dunedin Mayor Peter Chin said.

Dunedin's latest complex of council flats comes with some of the latest mod cons for the sustainability minded, with double glazing, solar assisted hot water, and full insulation.

The Otago Chamber of Commerce says Dunedin Mayor Peter Chin has got it wrong on the question of whether or not the council can discuss with the chamber its proposed rezoning of the harbourside industrial area.

The Forsyth Barr Stadium loomed large in Dunedin's building activity figures last year, with the project pushing up the value of building consents for the year by $116 million.