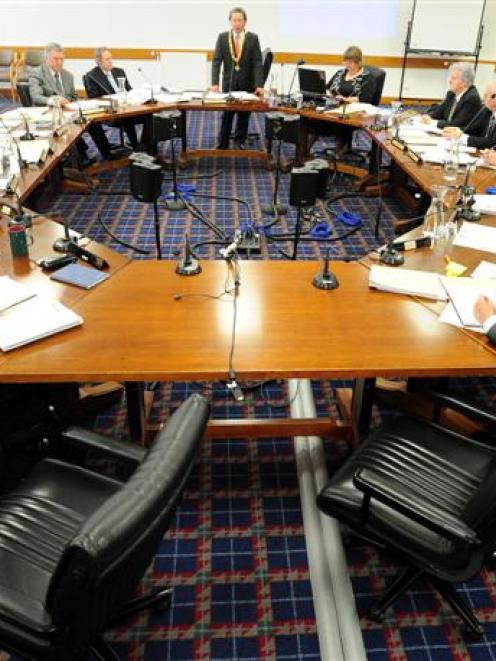 Dunedin Mayor Peter Chin fires a parting volley at his critics while addressing councillors near the end of the final Dunedin City Council meeting for the term yesterday. Photo by Craig Baxter.
Dunedin Mayor Peter Chin hopes history will be a kinder judge of the Dunedin City Council's achievements over the past three years than some of his outspoken critics.

Speaking near the end of yesterday's final Dunedin City Council meeting for the three-year term, Mr Chin drew a round of applause after firing a parting volley at those who criticised the council's performance.

He read a list of 21 projects and other initiatives undertaken or completed during the past three years, and praised the achievements of the city's "good, wise and experienced" councillors.

He said he had enjoyed his own time as mayor, and hoped history would judge his efforts - and those of his councillors - favourably.

"I believe we have served the city well with our robust debate, and I firmly believe that in the years ahead that maybe the people will look back on our commitment and the decisions that we have made with perhaps a kinder view than some do at the present time."

Mr Chin is standing for mayor again, but with just days to go until results are revealed on October 9 is facing a strong challenge from Cr Dave Cull, according to an Otago Daily Times poll of voters who had made their decisions.

Mr Chin said it was an "appropriate time" to reflect on the council's achievements yesterday, and - while there had been differences along the way - believed councillors had worked well together for the benefit of the city.

The list of capital projects and initiatives Mr Chin read out included the Regent Theatre upgrade, the development of the Wall Street mall and Tahuna wastewater upgrade, as well as support for businesses - through the industry project fund - and investment in free wireless internet in the Octagon.

"And, of course, we have the project that has really taken and consumed a huge amount of our time - the stadium," he said.

Mr Chin also singled out the "commitment" of council chief executive Jim Harland for special praise, as well as the rest of the council's staff.

"Three hundred and sixty-five days a year the staff are there, looking after the interests of this city ...

"I think as a council we are very grateful to them," Mayor Chin said.

He noted all councillors were standing again for election and wished them well, saying the result was now "in the hands of the people".