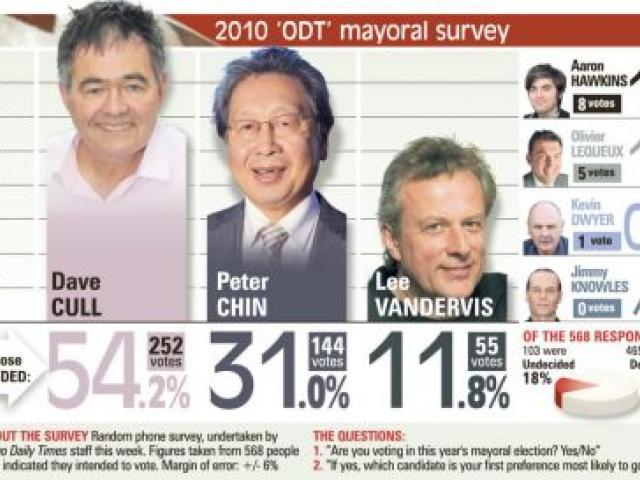 poll
Dunedin city councillor Dave Cull appears to have surged ahead in the mayoral race as the 2010 local government election nears its end.

The latest Otago Daily Times poll shows Cr Cull has increased his lead to 54.2% among people contacted who had decided on their preferred mayoral candidate. Two weeks ago, he was at 45.9%.

Former councillor Lee Vandervis is third on 11.8%, and no other candidates have reached 2%.

Cr Cull said yesterday to be able to win with more than 50% of the vote would give him "a good mandate" to lead.

Surprisingly, about 90% said they planned to vote.

That figure varies with the 36% who had actually voted by yesterday and the 55% of eligible Dunedin voters who are expected to vote this year.

University of Otago political studies department senior lecturer Dr Chris Rudd said there was no reason to suppose those saying they would vote, but then did not, were more likely to vote for just one of the two main contenders.

Similarly, there was no reason to suppose there would be a late surge in support for just one of the two main contenders.

"And, unlike a national election when a final week leaders' debate may turn the tables, no such event is planned for the local election."

Dr Rudd said even given the margin of error, the trend between the two polls was clearly towards Cr Cull.

Both candidates had advertised "heavily" in local newspapers, and Cr Cull had plenty of hoardings, but those had evidently cancelled each other out, and left Cr Cull in front.

Dr Rudd said it was a pity the closeness of the race, compared with 2007, had not stimulated a greater projected turnout.

Cr Cull said the results should mean he would get the quota needed for single transferable voting, so the STV system would not come in to play.

"It reinforces the positive feedback we're getting."

He noted, though, the real count would be done on Saturday.

Mr Chin said last night he did not want to comment on the poll.