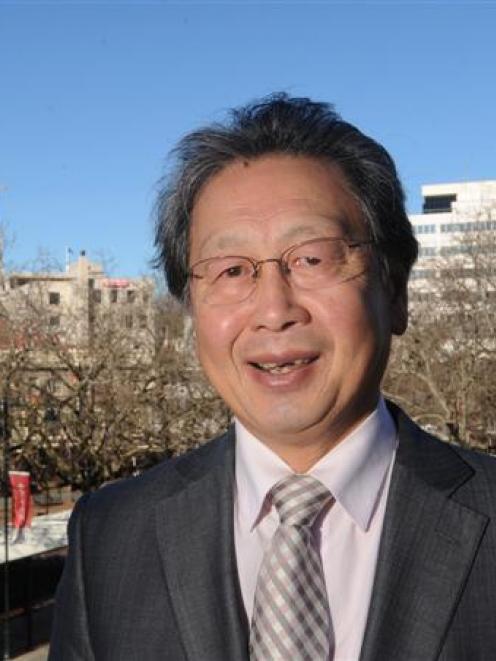 Peter Chin is citing the city council's achievements as he seeks endorsement of his mayoralty. Photo by Peter McIntosh.
What do you know about the candidates who are contesting Dunedin's mayoral campaign in the 2010 local body elections? Today, in the final Mayoral Profile, David Loughrey puts the questions to Dunedin Mayor Peter Chin.

Dunedin Mayor Peter Chin announced in June he planned to stand for a third term as mayor.

Mr Chin said then he was standing on his record, including his role in the decision to proceed with the Forsyth Barr Stadium, despite criticism from some quarters of his council's direction.

This week, he explained why.

Why are you standing again?

I feel that I have had the experience of 15 years.

I have the energy and commitment to this city, where I've lived all my life, to offer myself for a further term of service to this city, to the community.

Why should people vote for you again?

What are those achievements, the ones you are most happy with?

Well, the work that council does isn't decided year by year.

Under the Local Government Act we have a long-term community plan, which basically sets out for years ahead the direction that the city is going to go in.

So projects are put in place and planned over a period of time.

Over the six years that I have been the mayor, we have made the decision to go ahead with the stadium, which has been a huge decision by council, and probably the biggest decision financially that it has made since the commitment nearly 20 years ago to the water and wastewater upgrades, which have taken up till now, and still have a couple of years to be completed.

So over the last period of time we've committed to the stadium; we've continued with the water and wastewater treatment programme; we have made now the commitment to do the refurbishing of the civic centre and the town hall complex, now under way; a decision has also been made on the Regent Theatre, that is also under way.

From a personal viewpoint, I have taken huge pride in the completion of the Chinese garden, and I chaired the trust that took the 12 years that it did to produce a garden that is really ... it's a world-acclaimed garden because it's a truly authentic garden here.

I've also worked very hard in terms of building the relationship with our tertiary sector, and I think I've also led the council in a way that every councillor has had the opportunity to be themselves and have the opportunity of expressing their opinion in a free way.

If we look at the criticism that is running around on spending and consultation, fair or not, there are those who say we have been too free with spending. What's your opinion on that?

In terms of spending, our spending is undoubtedly, and I accept it is at the higher threshold, which then is going to have a limiting factor into the future.

And the second part of that, in regards to consultation?

I believe we have consulted, and that has been affirmed by the Auditor-general's Office, and the requests that have been made by various groups to them about the way that the council has handled various issues.

In every case, the council has been vindicated in the way that it dealt with that.

I think that the difficulty with consultation is that there is an expectation by many people that if you consult with me, you will do what I tell you to do, rather than consultation as listening to everybody, but weighing everything up and making a decision, which may well be different.

So there are many people who take the very simplistic view that you haven't consulted with me if, having heard what I say, you don't do what I want you to do.

Do you think there is a level of concern in the community about all these things we've been talking about that needs to be dealt with or addressed?

Yes, I think there has.

But if I look back, one of the things the community has always said to us is maintain what you've got.

We're looking after these assets that require work to be done on an ongoing basis.

And they cost money.

In addition to that, opportunities arise to do other things, and we build those in over a period of time.

It also heralds in advance the income expectation, and what the rating levels will be into future years.

And that's just part of the process, so what council has been doing, in all the years I've been on council, is the projected rating for the next year, as set out in the plan of the current year, has never been the amount that's actually been set come the time.

Would you agree that there has been louder criticism in the last three, four years? Does that have to be dealt with?

I suppose it stems from consultation.

Because the requirement for consultation is a creature of statute, [from] recent times.

So before that, there was no consultation in the way that we do it now.

So that's behind the level of criticism?

Consultation creates an expectation which isn't always fulfillable, because if you've got two people with different opinions on the one subject, and if I am the person that has got to make a decision, one of them is not going to like it.

One of the concerns, as you're aware, is about debt and finance. To people who have concerns about that, if you were to placate those concerns, what would you say?

Before you do that, do you think the city is in financial difficulties?

I think that we have heralded each year what is going to happen, so we know next year and the year after are years where the rates increase is higher than the years that follow.

The council in each year, as it has done in the past, has monitored the situation and made changes to try and make that increase as little as possible.

But I want to look at it in this way: one of the effects of what we've done, and it hasn't been so much the reason we've done it, we are going through currently an economic recession where building activity and infrastructural activity are not great.

We've got the work that's going to be done within the town hall, and we've had Wall Street, of course.

If you take away those projects, what other projects have there been of a size that employs a significant number of people?

The only one has been the three stories on top of Otago House.

There has been nothing else.

So the council has played its part in ensuring that the workforce stays here.

I want to repeat, it's not the reason that we did it, but it's been hugely timely, because it's the flow-on effect of those people being employed, and their families, and the services that flow off them that maybe has helped this city.

Considering debt, are you concerned that something may come up over the next nine years, until we get that headroom that finance and corporate support general manager Athol Stephens has talked about, that may get us in some trouble?

We are always mindful that there will be matters, emergency things that will happen, and you deal with it when it happens, because if you organise your life on the basis of all the things that might possibly happen, you end up actually doing nothing.