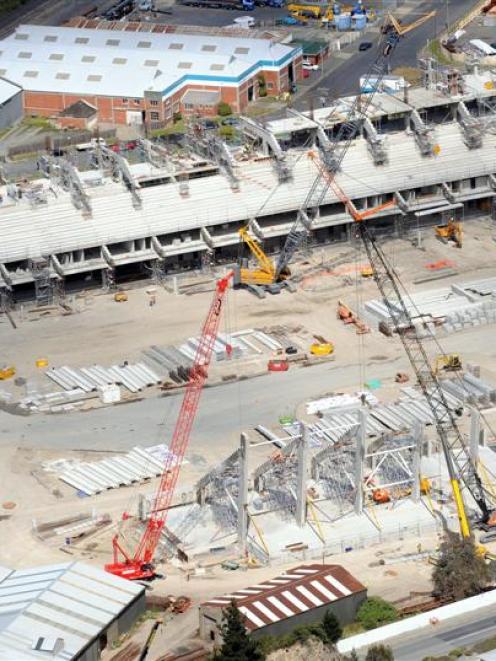 That figure made up a significant percentage of the total value of consents for the year, which added up to $289 million.

The total was hailed by Dunedin Mayor Peter Chin, who described the project as "a great help to the economy" in a time of recession.

But Cr Chris Staynes, who has voted against the stadium, argued the "lion's share" of the money being spent was going to companies outside the city.

Asked to respond, Mr Chin said he did not accept that argument, instead saying the project was creating employment for the city.

"I'm not quite sure where that logic comes from. The important thing is that the employment is here in Dunedin, and the building consents are for work being done in Dunedin."

People working for companies outside the city were staying in the city, earning money and spending it here, he said.

Asked about the percentage of contracts going to Dunedin companies, Carisbrook Stadium Trust development director Darren Burden said last night about $45 million of the $90 million of subcontracts tendered so far had gone to companies south of the Waitaki River.

Another $10 million had gone to South Island companies.

Mr Chin said the building consent figures showed decisions the council made to go ahead with the stadium, and other major projects in the city like the Town Hall and Dunedin Centre redevelopment, were "bearing fruit" for the community.

Council chief building control officer Neil McLeod said the stadium had so far had gained 28 consents worth $116 million, with the major permits issued for the building envelope and roof, worth $57 million, the stands at $18 million, and the fit-out for the stands at $33 million.