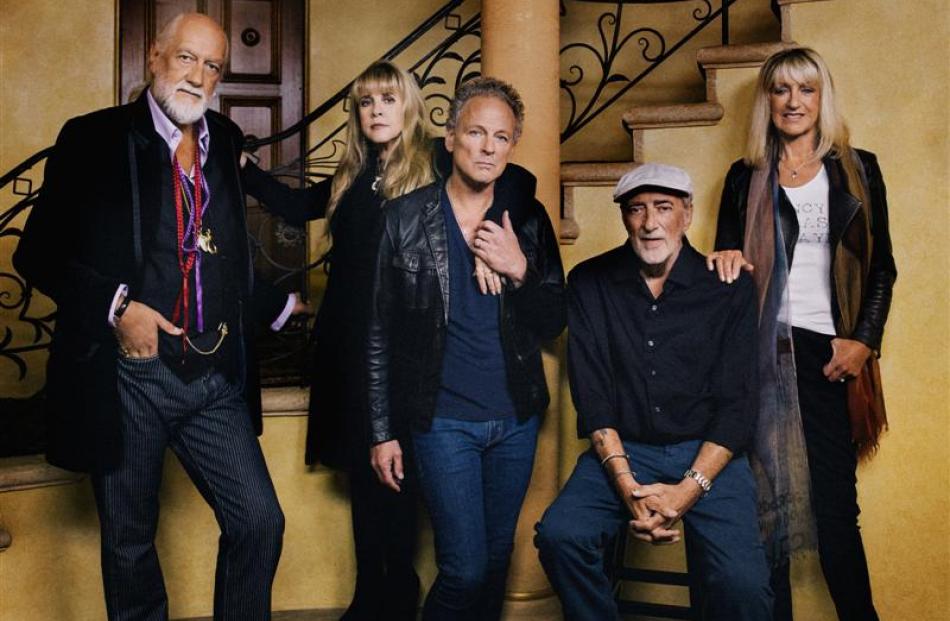 The rumours are true -- Fleetwood Mac is coming to Dunedin.

It was confirmed yesterday the group, one of the world's best-selling bands, will perform its only South Island show at Forsyth Barr Stadium on Wednesday, November 18.

Tickets costing between $100 and $300 plus fees will go on public sale from 10am on April 1, and a bumper crowd is predicted to pump millions of dollars into Dunedin's economy.

Their two and a-half-hour show will cover the hits that have seen the band sell more than 100 million albums since 1967, including The Chain, Rhiannon and Go Your Own Way.

A performance at Auckland's Mt Smart Stadium on November 21 will complete the New Zealand leg of the band's On With The Show world tour.

Dunedin Venues Management Ltd chief executive Terry Davies said securing the concert was a major coup for the city and "probably the highest-profile show we've put on at the stadium since it was built".

"The quality of Fleetwood you can't question. It's an iconic band that has an incredible following.

"Everyone will know half their songs ... if not all the songs they will perform at the stadium. It will just be a magical experience."

He was reluctant to predict a sell-out for a Wednesday night show, but expected ticket sales would be "incredibly strong".

"I'd be disappointed if the region -- if the South Island -- didn't support a band who are as iconic as this. It's the only chance in a lifetime that you're going to get to see them, probably."

The concert will mark the band's first appearance in New Zealand since 2009, and comes after the group cancelled three Auckland shows scheduled for 2013 when McVie was forced to undergo treatment for cancer.

Mr Davies said fans were expected to travel from around New Zealand and overseas for the Dunedin concert, which could inject between $8 million and $10 million into the city's economy.

"It will be a significant economic boost to the city."

Securing the concert will also cap a remarkable turnaround for the stadium concerts in 2015, after a barren period following Sir Elton John's sell-out show in 2011.

This year's schedule has already included performances by Rod Stewart on April 11, and Neil Diamond on October 24.

Lorde, Broods, Jimmy Barnes and Sol3 Mio have also performed at the Dunedin Town Hall, another DVML venue, since the start of the year.

Dunedin Mayor Dave Cull yesterday congratulated DVML for its concert successes and securing Fleetwood Mac, which was a "well-loved band with a lot of fans around Dunedin and beyond".

"There is still more work to be done but it bodes well for the future."

Mr Davies said securing Fleetwood Mac had been an eight-month exercise that began by building a relationship with the world's biggest promoter, Live Nation.

"All five original band members are reunited at the peak of their powers, which will make for a fantastic first-ever show for Fleetwood Mac and Live Nation at Dunedin's Forsyth Barr Stadium and a South Island exclusive."

Mr Davies said ticket sales for this year's concerts meant there was now growing confidence among promoters that Dunedin and the surrounding region could support big acts, and the momentum was expected to continue.

"Next year, there's some things that we're talking about already, at the moment, that are bigger than Fleetwood."