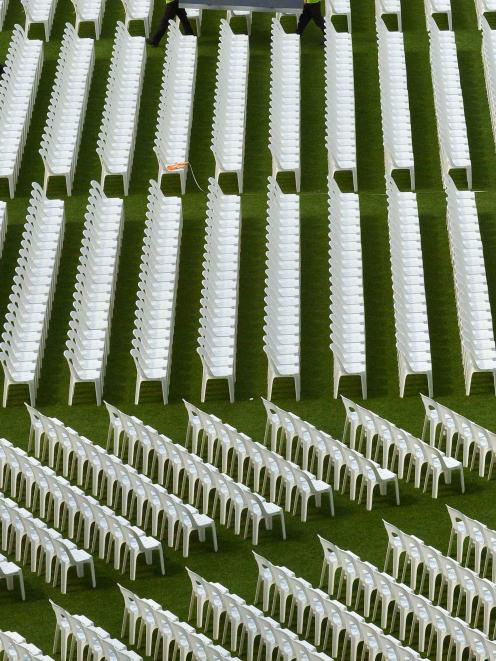 Yesterday, the stadium was undergoing its transformation into the concert venue.

So it should come as no surprise the city's accommodation providers were at capacity this week, Otago Motel Association president Gavin Turner said.

''For the last month or two, whenever there's been a cancellation for accommodation in Dunedin this week, it's been filled within 10 or 20 minutes.

''The town is packed for the next three nights. If there's rooms left, they are at halls of residence at the university.

Fans expressed excitement online yesterday as they geared up for the concert.

''This is going to be pure gold. The Rumours-line-up Fleetwood Mac is simply the best,'' Paul Le Comte, of Dunedin, said.

Another fan said she had seen Stevie Nicks in concert before, but never thought she would see Fleetwood Mac together after the band split up.

''I listen to their music all the time - the best music you can chill out to.

Mr Davies said it would be practically a full house at the stadium tonight.

''The speed at which this concert sold out in the first ticket release was phenomenal, and there are only a small number of tickets remaining.

''It is our first show with global concert promoter Live Nation, and with their association with significant international artists we hope to attract more big performers to the city.''

Because the audience was so large, Mr Davies advised patrons to arrive early so they did not miss any of the entertainment.

The gates open at 4.30pm and the opening act, Australian brother and sister duo Angus and Julia Stone, get the evening under way at 6.30pm.

He said access to the stadium via the new walkway from Fryatt St would open up parking areas not traditionally used for past events.

He reminded fans that the closer they parked to the stadium, the longer it would take to leave the area.

The concert is expected to finish about 10.45pm.