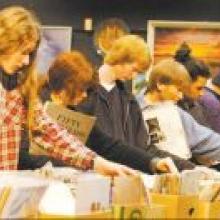 ODT columnist Dave Cannan asked which musical act you would most like to see at Forsyth Barr Stadium. He was surprised by the feedback.

The Wash has been inundated for the past two days with votes and comments for our "poll'' on trying to answer the question: "Who do you want to play at the stadium?''

As you can see from our results graphic, it was pretty much a one-horse race, with Mumford and Sons finishing well out in front, ahead of Pink, U2 and Bruce Springsteen.

But, before anyone starts to get too hung up on the final results, I need to reiterate that this was very much an "unscientific'' poll, more of a fun way to gauge readers' opinions.

Because of the huge numbers that rolled in, both by email and through our online edition and ODT Facebook, I realised we needed to apply a fair "formula'' for allocating votes, so decided to restrict each reader to just THREE votes.

Some sent in long lists of acts (I took the first three only) and others sent just one, but all were of equal importance.

So, it's best to view the results panel with something of an open mind and an "indicative only'' attitude.

Interestingly, while there were 22 solo performers and groups who dominated the poll, readers singled out 92 different acts worthy of their votes, ranging from popular Dutch violinist Andre Rieu and his orchestra to a raft of heavy metal bands such as Metallica and Slayer and numerous "old rockers'' like the Who and ZZ Top.

So, what to make of the results?

Well, firstly, I have to wonder if Mumford and Sons' runaway win was influenced to some degree by the fact they were top of my list of possibilities (probably), although, if you've seen them perform live or just on DVD/You Tube (like me and millions of others), you'll know they have a huge following.

Ironically, though, when I checked on the internet yesterday, it appears the London group are still enjoying a lengthy sabbatical, having announced back in September last year they were taking a break from performing after a long tour of the United States. Their website simply states: "No forthcoming tours'', so it's a case of watch this space.

The website for poll runner-up Pink (who performed in the Dunedin Town Hall in, would you believe, November 2002?) had a similar message: "There are currently no scheduled dates.''

So, who is on the road, so to speak? Well, it's worth pointing out that as I was tallying up the votes yesterday, three music-related press releases arrived by email, although two of them did not have good news for concert-starved Otago fans.

Firstly, opera star Andrea Bocelli announced he will be touring Australia and New Zealand in September for a series of ``major stadium concerts'' -- in Auckland, Brisbane, Sydney, Adelaide, Melbourne and Perth.

Similarly, pop-rock trio Hanson, who enjoyed some chart success many years ago, are also touring New Zealand and Australia in August this year but again, you guessed it, not in Dunedin.

There was better news, though, for those readers who are Sky subscribers. This Saturday, at 2.30pm, the Sky Arena channels (65 and 66) are screening a Rolling Stones concert held at Hyde Park last year. Sky says the screening will be free to all its domestic customers.

So, thanks to everyone who entered into the "fun'' spirit of this poll and made the effort to vote. It was gratifying to get such a large turnout.

I've sent the results of the readers' poll to Terry Davies, the new CEO of Forsyth Barr Stadium, and he's promised to comment on them in tomorrow's Wash column.

Results of The Wash's Who do you want at the stadium readers' poll, conducted both through the newspaper and online were: