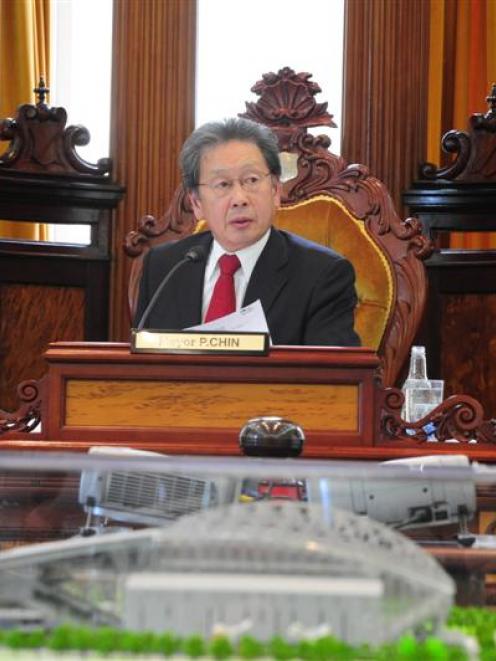 Mayor Peter Chin at yesterday's Dunedin City Council meeting. Photo by Craig Baxter.
A judge will decide the immediate fate of the $198 million Otago stadium within days, after Dunedin councillors yesterday voted to sign a construction contract despite the threat of a High Court injunction.

Dunedin city councillors voted 10-4 in favour of signing a guaranteed maximum price contract for the stadium with Hawkins Construction after yesterday learning Stop the Stadium's injunction application would be the subject of a High Court hearing in Christchurch on Thursday.

The signing of the contract was approved by councillors subject to a favourable outcome at the High Court, with the judge expected to release a decision by 5pm on Monday.

Yesterday's vote meant the stadium would be "all go" if the judge threw out the injunction application, Mayor Peter Chin told councillors.

Speaking after the meeting, Mr Chin said: "I'm very, very happy with the outcome of a long day and a long process.

"I think the decision is the right decision."

He was confident the court would rule in the council's favour.

"If the decision is a positive decision, then the way is clear."

Stop the Stadium president Bev Butler walked out of yesterday's meeting at 4.55pm, shortly before the final vote, and told the Otago Daily Times she was "feeling a bit sick", having "heard it all before".

"Stop the Stadium looks forward to the ratepayers' day in court," she said.

"We feel we have got a good case."

The public section of yesterday's extraordinary council meeting was expected to begin about 11am, but was delayed several times as councillors weighed legal advice relating to the injunction notice and the implications of signing - or not - the contract.

At 1pm, Mr Chin held a press conference to inform waiting media that the council had resolved to defend the proceedings with urgency, and had instructed chief executive Jim Harland to work with the council's legal advisers and, if appropriate, to instruct Queen's counsel to represent the council.

The council also confirmed its commitment to resolution 7 of its meeting on February 9, which stated the council was committed to the project.

When the meeting eventually moved into public deliberations shortly before 3pm, the stadium received a boost with confirmation the Government's $15 million contribution would come as a grant on July 1.

Mr Chin also tabled a letter from Otago Regional Council chairman Stephen Cairns, confirming its contribution of $37.5 million would be paid over three years, beginning once the Awatea St site was cleared and construction had begun.

Several councillors at yesterday's meeting attempted to strike a more conciliatory tone than in the past, with Cr Teresa Stevenson saying, whatever the outcome, she hoped Dunedin could go back to being the supportive community it was.

Mr Chin said weighing the merits of the stadium during the past few years had been a "very tortuous" process, and the council, with the benefit of hindsight, "could have done things better"If Thursday's injunction hearing produced a result favourable to the stadium, Mr Chin said he hoped the community and council would "support the project, so that the differences we have had . . . will be forgotten a bit, as we collectively make it happen".

She vowed she would "never" support the stadium - "Why would you embrace something that you don't want?" - and also indicated Stop the Stadium was still planning other ways to attempt to derail the project.

"You will just have to wait and see.

"We have to keep our powder dry."

Cr Fliss Butcher apologised for not attending the meeting.