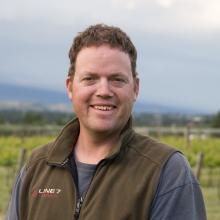 James Dicey
Hundreds of extra staff are needed in Central Otago's vineyards following warm weather that could mean the earliest season in the district in about 25 years, Bannockburn viticulturist James Dicey says.

"It's [earlier] than anything I've seen in my time here. We're now talking about what my father [wine industry figure Robin Dicey] has seen, and he says it's earlier than in about 25 years. So we could see the earliest harvest we've had in about 25 years.''

Mr Dicey said the warm weather had brought things forward in the entire Central Otago district and more staff were needed on many vineyards.

He needed 10 to 20 staff on the vineyards he managed, and estimated ``hundreds'' of staff would be needed district-wide.

"It's a bit tight [for staff numbers], putting it mildly.''

The early season for fruitgrowers was exacerbating the staff situation, and vineyards were competing with orchardists, who also needed staff earlier than usual, Mr Dicey said.

The cherry season is also early, and apricots in a Cromwell orchard were picked in November for the first time in its 103-year history.

Mr Dicey said the warm weather would mean not only an early season but a longer season, which could translate to higher quality grapes and higher yields. But he did not want to pre-empt a ``bumper'' season.

"You'll never get a comment from me saying that. We need to wait until the grapes are picked and the wine's in the bottles before we can talk about that.''

Vineyard staff were still finishing wire lifting and also beginning shoot thinning and bud rubbing. They would also have ``a month of ridiculous levels of tractor work'', doing things such as crop spraying and mowing, Mr Dicey said.