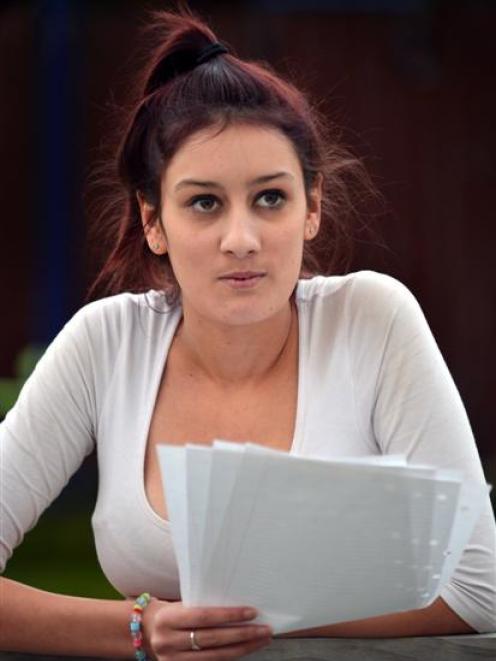 Danielle Newton says she has applied for more than 50 jobs in her attempts to find work. Photo by Peter McIntosh.
What is life like without a job for six months? It is a struggle, those at the coalface say.

During the past eight months, Dunedin teenager Danielle Newton has applied for more than 50 jobs but has not even had a trial.

The 17-year-old has lived at home with her mother since leaving school at 15, but she wants a job and a place to call her own.

''I go into places asking for jobs and they say, 'Do you have any experience?'

''But I haven't got my foot in the door to get experience.''

She took part in a training programme with Kokiri Training Centre, something she felt benefited her more than school.

However, the qualifications had not resulted in any interest from possible employers. She was not receiving a benefit and would be happy to take ''any kind of work whatsoever'', but nothing was available.

The stereotype of unemployed people being lazy and living comfortable lives at taxpayers' expense was unfair, she said.

''There's no fun whatsoever. I sit at home in bed looking for jobs.''

''Your life is very limited. I have got no money. It sucks relying on other people,'' Miss Newton said.

Her struggle is echoed by Campbell Tobin, who has been unable to get a full-time job for two years.

He conceded he struggled because he had ''no real qualifications'' and got into some trouble when he was younger, but ''my life's turned around''.

The 27-year-old lived with his partner and their three children and was committed to providing for them.

He, too, was at the point where any job was better than no job.

''When you do get an opportunity, so much rides on it that it almost becomes too much pressure to cope,'' he said.

Miss Newton and Mr Tobin both said they intended continuing their search until they found jobs.