Memorial soon to be installed 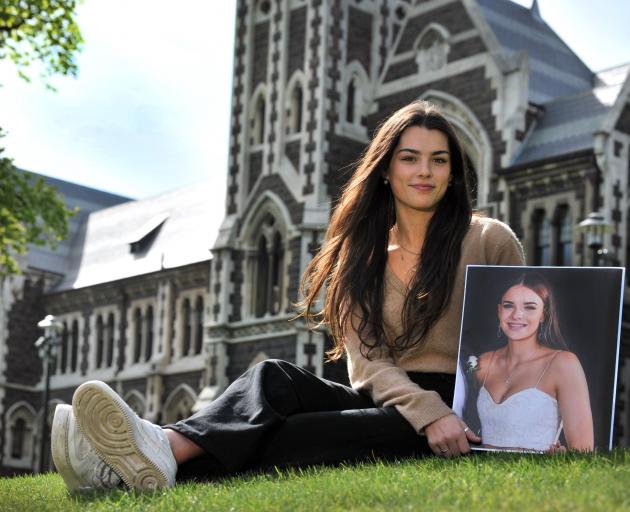 Megan Prentice says she is glad there will soon be a space at the University of Otago where people can come together to honour the memory of her friend, Sophia Crestani, whose picture she holds. PHOTOS: CHRISTINE O’CONNOR
Megan Prentice will soon have a "positive place" where she can remember her best friend.

The 20-year-old University of Otago student has led a move to have a memorial bench installed at the Dunedin campus in honour of Sophia Crestani, an Otago student who died at a flat party last year.

Miss Prentice and her friends raised the $3000 needed for the project through a Givealittle page.

The surplus of about $1500 will help fund a scholarship named after Sophia Crestani. The bench will be installed next week.

They had different hobbies — Miss Crestani sewed, coached gymnastics and got involved in school holiday programmes for children; Miss Prentice played piano — but they were "attached at the hip".

"We had almost every class together," Miss Prentice said.

"If we had study period and I practised piano, Sophia would come and watch.

"We would go to each other’s houses, just to nap."

A memorial bench for Miss Crestani.

Miss Prentice is in her final year studying for a bachelor of science degree, majoring in neuroscience.

Her best friend was in her second year studying mathematics and statistics when she died.

They lived about a 30-second walk from each other in north Dunedin last year and had planned to flat together in 2020.

"I was really looking forward to living there in the same flat," Miss Prentice said.

"We would have been great in a flat together."

She said the pair had spent the day of the party, October 5, together.

When they got to the flat known as The Manor, there were many people they did not recognise.

They decided to go upstairs but "everyone was stuck".

"I remember being crushed by so many people, thinking ‘I might die’. I couldn’t breathe.

"My friend pulled me out. I saw someone getting CPR and it was Sophia."

Miss Prentice said she felt Dunedin needed a nice environment where her friend could be remembered.

The bench will be installed near the clock tower and cherry blossoms.

Miss Prentice saw the macrocarpa bench — made at the university’s property services joinery workshop — for the first time this week.

"It’s nice for me to know there will be a positive place to go. It’s huge as well. It’s beautiful."