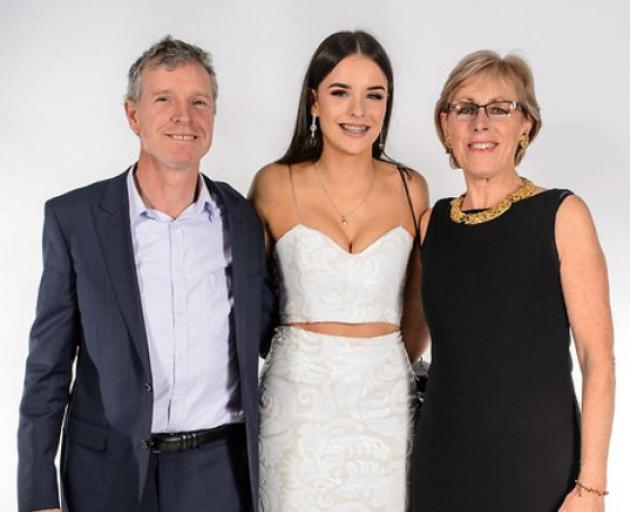 Sophia Crestani with her parents, Bede Crestani and Elspeth McMillan, ahead of her year 13 ball. PHOTO: SUPPLIED
A year on from the death of a student at a Dunedin flat party, her parents say their drive to help make the area safer continues. Grant Miller reports.

Sophia Crestani’s parents are pledging to push on to help create a safer environment for students in North Dunedin.

They have a five-year vision for what they want the Sophia Charter — named after their daughter who died at a Dunedin flat party last year — to achieve.

"The charter parties have achieved more than we could have imagined already," Miss Crestani’s father, Bede Crestani, said.

But the July signing of the charter, which is a multi-agency effort to promote a circle of support for community responsibility and wellbeing, is far from the end of the process.

"It’s got to be a living document," Mr Crestani said.

He and his wife Elspeth McMillan plan to be involved in annual reviews.

Their efforts to fully understand the circumstances of their daughter’s death are also not yet finished. More answers should be forthcoming at a coroner’s inquest, expected to be held late in 2021.

Miss Crestani (19) attended a flat party on October 5 last year. It became overcrowded and a stairwell pile-up resulted in her death.

"The world ended for us," Mr Crestani said.

A year on, the family’s shock has not really dissipated.

"I look at her photo every day and I just can’t believe she’s not here," Ms McMillan said.

"It’s very hard to rationalise how she can go to a party and hang out with other students and lose her life in such senseless circumstances."

After being told of her death, Mr Crestani and Ms McMillan got on the first available flight from Wellington to Dunedin.

They felt they needed to be there for their daughter’s friends and other students of the University of Otago, as well as their daughter.

"We couldn’t think of her being in a hospital morgue on her own," Ms McMillan said.

The last time her family saw her alive was at the funeral of Ms McMillan’s mother in September, 2019.

Miss Crestani was a second-year student at the university, studying mathematics and statistics. Her parents were determined that the story would not end there.

When they got to Dunedin, a clean-up in north Dunedin was organised.

A $50,000 scholarship has been set up in Sophia Crestani’s name.

The scholarship is for community-minded female second-year students studying mathematics or mathematics with statistics. Each scholarship will normally have a value of $4500 for living costs.

A second scholarship, for which about $35,000 has been raised so far, will have more general criteria. Mr Crestani said he hoped the remaining $15,000 for it would be donated before Christmas.

The couple have been involved in the detail of what became the Sophia Charter.

Ms McMillan said they were not angry and felt they had been listened to. She did not want their daughter’s death to "count for nothing".

"We would really like to see the politicians step up and do something."

Prof Hayne described Mr Crestani and Ms McMillan as "the most emotionally strong people I’ve met in my life".

"They’ve not lost any drive or enthusiasm to effect significant change."

Prof Hayne said she met them when they were "in the heat of their grief over the loss of their beautiful daughter", but they did not blame anyone.

"They were 100% committed to the fact Sophia’s death would lead to change, and unwavering in that view."

The couple said they were initially taken aback by the condition of housing stock in Dunedin and the extent to which students would ‘‘get away with outrageous behaviour’’.

They learned individual agencies were working hard to foster improvement, but there was no collective way of going about it.

They were amazed by the turnout of about 500 students who came to listen to them when they visited Dunedin to sign the charter.

Miss Crestani’s twin sister Frances is a student at Victoria University in Wellington and elder brother James works in the IT industry.

The headstone is to be unveiled next month, when Miss Crestani’s friends can be there.

All parents would agree.

The coronial inquest should address structural issues in housing stock, such as egress safety.