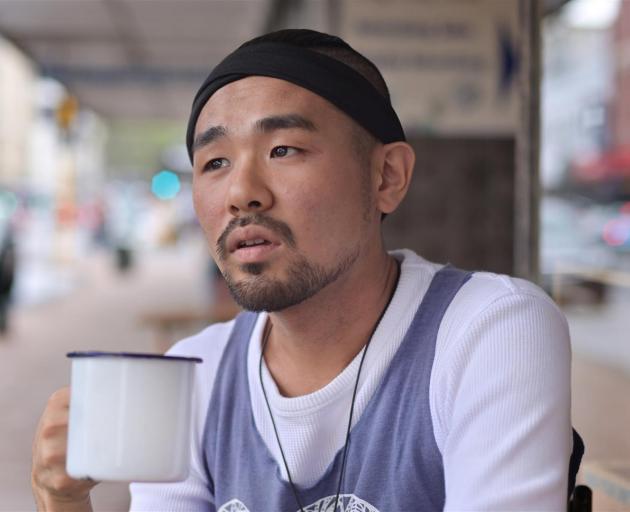 Japanese poet Hideto Akasu is bringing his one-man show, based on his experiences as an exploited worker, to the Dunedin Fringe Festival. Photo: Christine O'Connor
The tension between a life centred on capitalism and one based on art takes centre stage in one-man show The Unfolding of Benjamin's Misery partly based on the author's struggles to make ends meet in a foreign country.

Twenty-four-year-old spoken word poet Hideto Akasu said he grew up in Japan, but has spent time in the United Kingdom, America, and Mexico, as well as New Zealand.

The main character in his show, Benjamin, is an undocumented migrant who works as an usher for an event venue in Dunedin.

A ''lovely fellow'' from an unspecified country in Asia, Benjamin is exploited and underpaid, but the wages he gets are still more than he would earn in his home country.

A capitalist mentality haunts Benjamin wherever he goes, leading him to feel enslaved and suffocated. During the show he meets his counterpart ''the Bard'', whose financial situation is as bad as Benjamin's, but who has a more enlightened view of life.

The story had a personal resonance for Mr Akasu, who has been living in different places around the world for the past six years.

While he was ''fortunate enough to have enough education to save myself'' from most exploitative environments, he had seen a lot of other people settle for less than the minimum wage, Mr Akasu said.

''They know you want this job so much, that they can actually exploit you.''

The character of the Bard was born after he won a slam poetry competition in Liverpool, in the UK, last year.

Most of the audience was English-speaking, and winning the competition gave him some assurance that his voice, sharing his experiences as an outsider, did have value, he said.

Having studied liberal arts in the US and theatre in the UK, Mr Akasu said he had no formal background in poetry - but he had been fortunate enough to have friends who were poets, and he followed their example of taking inspiration from what was going on around them to make the world a better place.

Having left Japan for ethical and spiritual reasons, Mr Akasu said he realised his experience was different from that of other people who had had to leave their countries, for instance refugees.

However he still said he felt that ''this is my fight''.

''Once you fall into this category of a foreigner, there isn't much difference,'' he said.

Mr Akasu's show has already been to the Auckland Fringe Festival, but he said he thought of Dunedin as its true premiere.

''It's sharpened and polished enough for me to consider it ready.''