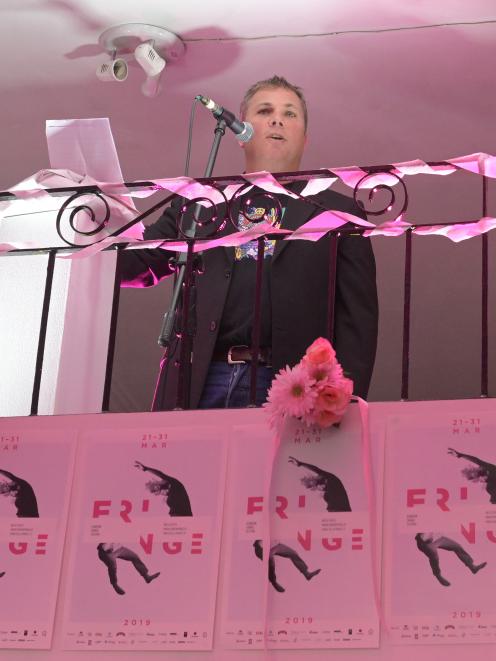 Festival director Gareth McMillan at the launch of the 2019 Fringe Festival Programme at the Dog with Two Tails in Dunedin yesterday. Photo: Linda Robertson
From the strange to the sublime, the Dunedin Fringe Festival is back and has something for everyone.

More than 80 acts have been announced for this year's festival, which will run from March 21 to 31, bringing quirky and engaging performances and art to the city.

The official launch of the festival, which has been running since 2000, was held last night at the Dog with Two Tails.

Director Gareth McMillan said the festival was the third largest in the country this year, the Auckland Fringe Festival knocking it out of second-place position.

However, he was still happy with the line-up.

A particular highlight was the involvement of the Dunedin Multi Ethnic Council this year, and a week of race relations events at the Otago Museum Reserve.

The range of venues this year also included the Dunedin Botanic Garden, the site of a ''live-action adventure'', and the Otago Corrections Facility outside Milton, which was the site for Trouble-D, a journey through the life of a recently released prisoner.

Mr McMillan said the festival was ''really delighted'' to secure the play, despite the fact the distance from Dunedin was a challenge.

It was in forum theatre format, so it would involve some voluntary audience participation, and was designed to make people think about themes and social issues rather than being pure entertainment.

Among the international acts was US performer Austin Dean Ashford, whose show (I)sland (T)rap combined ukulele and rap in a retelling of Homer's Odyssey, centred on the experience of Black people in America, he said.

As well as music and theatre, the Fringe will also feature visual art, performance art, and dance.

The Emerson's Festival Club will be returning, with four nights of local music curated by Dunedin musician Nadia Reid.

Experimental music festival Lines of Flight is also back this year, at the Dunedin Public Art Gallery and the Port Chalmers Pioneer Hall.