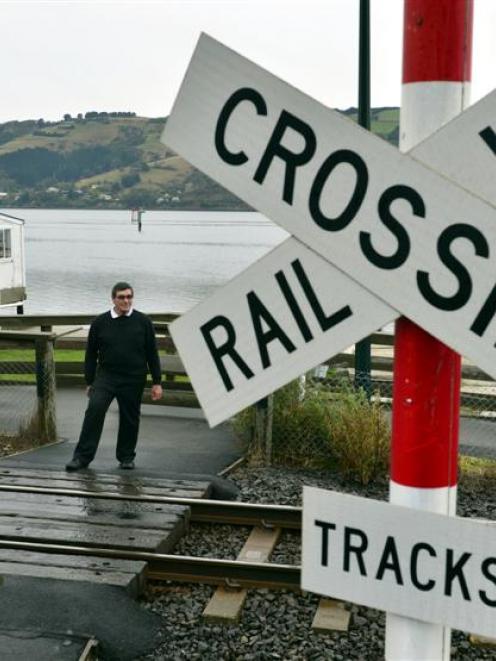 The railway crossing on the shared path at the Ravensbourne Boating Club.
The Dunedin City Council is to improve safety at a rail crossing on Dunedin's harbourside walk and cycleway after investigating concerns about the crossing's safety.

Ravensbourne Boating Club Commodore Warwick Graham told the Otago Daily Times in May someone could be killed if nothing was done to fix the crossing on the Ravensbourne section of the shared track.

''It's no good waiting until somebody gets killed. I don't want to be picking up body parts off the railway lines,'' he said at the time.

Following those comments, the council carried out its own investigation into safety at the crossing, and based on video surveillance in June, found an average of at least 421 cyclists and pedestrians crossed it each day.

Council senior traffic engineer Ron Minnema said following the investigations it was decided the number of trains which passed daily and the level of use of the shared path meant ''at this stage'' a major upgrade of the crossing was not needed.

The council had instead chosen to make minor alterations to improve safety at the site at a cost of about $4000. These alterations included installing four new ''look for trains'' signs, putting a skid-resistant surface on the timber sleepers that form part of the crossing and reducing the steepness of the approach ramp so it was easier to cross for people using wheelchairs. It was hoped the work would be done in the next few months.

The council would monitor how busy the crossing was in spring to assess whether further measures, such as installing flashing lights and beacons, were needed.

Mr Minnema was hesitant to say whether the crossing should have been made safer when the shared path was constructed, saying only: ''It would look that way, wouldn't it?''Mr Graham was happy the council had responded to his concerns, but added that even once the alterations there would still be a safety risk.

''I still think the barrier is probably the best way to go, although it's probably a lot more cost,'' he said.