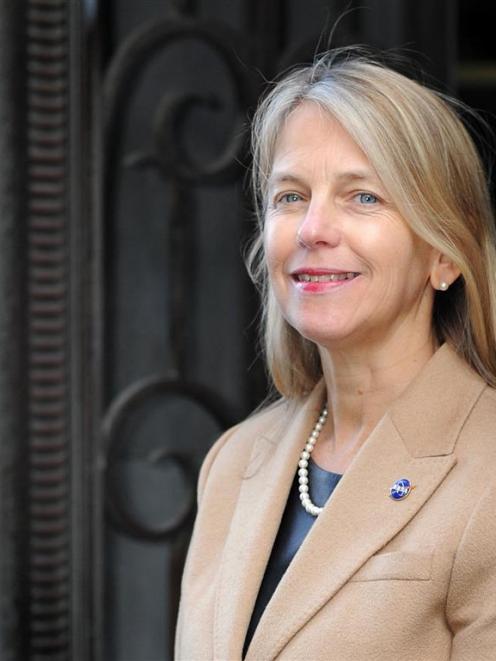 Nasa deputy administrator Dava Newman is confident astronauts will land on Mars by 2039. Photo by Christine O'Connor.
Nasa deputy administrator Dava Newman, previously a professor of astronautics at the Massachusetts Institute of Technology,was in Dunedin this week and spoke to reporter John Gibb about Nasa's plans for a manned landing on Mars by 2039.

Travelling to Mars is no longer an idle pipe dream, and Nasa deputy administrator Dava Newman is confident astronauts will have their boots on the Red Planet by 2039.

Dr Newman has been in Dunedin this week to speak at the 10th biennial New Zealand International Science Festival, with funding support from the United States embassy.

She outlined Nasa's vision for travel to Mars in a talk titled "Exploring Together'' at the University of Otago's St David lecture theatre at 7.30pm on Thursday.

Dr Newman was enjoying her first trip to New Zealand- "a beautiful country''-, having spent a few days in the North Island before heading South. 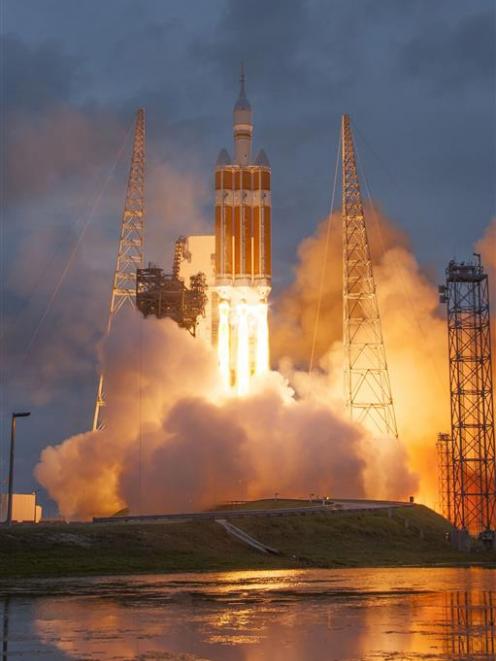 The Lockheed Martin-built Orion spacecraft launches from Cape Canaveral, Florida, aboard a United Launch Alliance Delta IV Heavy rocket in 2014. Photo by Lockheed Martin.
She was pleased to participate in the science festival, which had been running for two decades.

The latest festival's theme is "Be Curious'' and she noted that Nasa's latest Mars rover was also called Curiosity, having been given that name by an American school pupil.

Nasa is seeking even wider international support for the Mars mission, which she says will be the greatest voyage undertaken by mankind.

The United States was closer than ever to sending American astronauts to Mars, and closer than "anyone, anywhere, at any time has ever been'', she said.

Many countries were being asked to consider if they wanted to be part of the planned mission, and there was growing international support, and momentum behind the project was growing.

"We have a good framework. This is a global expedition.

"A new consensus is emerging around Nasa's plan and timetable for sending astronauts to the Red Planet in the 2030s,'' she says.

"This consensus extends to everyday dreamers who envision a future where there is a continuous human presence on Mars and where our own quality of life here on Earth is better because of the technologies that we develop to get there.''

She was hearing fewer people asking if Mars was the right destination.

"Rather, they're asking questions like, ‘How can we be a part of this?' and ‘What are some areas where we can work together?'.''

Asked if she would be willing to travel aboard Nasa's futuristic space craft Orion to Mars, if it was leaving next week, she said she would.

She said the toughest thing about travelling there would be for four people to be living and working together in a space about the size of a bathroom for the two-year return trip.

She emphasised the need for good team work, but said that, like many of Nasa's projects this was one that would take more than a decade to fully develop.

The necessary propulsion and life support systems for fully independent travel to Mars and return were yet to be fully established and tested.

"It's for the next generation.''

"I really don't think it will be myself or my colleagues.

"We do all this work for the next generation.''

The eventual Mars flight crew members were, in fact, likely to include people now at secondary school - people who were part of the "Mars generation'', she said.

The best part of the eventual expedition would be exploring Mars and looking for evidence of life.

She acknowledged that scientists had already shown on Earth that some micro-organisms were "extremophiles'' that could survive in very difficult conditions.

Asked if life was likely to be found on Mars, given the presence of frozen water and vulcanism that raised the possibility of liquid water below the surface, she said some form of life could well be found there.

But this was "probably past life - like fossilised past life'', perhaps microbial.

"But we've got to prove it,'' she emphasised.

To find evidence of microbial life on Mars, even if in fossilised form, would be "the scientific breakthrough of the millennium''.

In the past, some international scientists have actively promoted robotic space exploration, arguing it was cheaper and safer that manned expeditions.

Asked about different perspectives on space exploration, Dr Newman said there was no conflict in the Nasa programme, and Martian exploration would ultimately involve a "suite'' of both astronauts and robotic devices, such as rovers.

The first step, involving the use of the International Space Station, was already under way and would continue until 2024.

What was being learned on the space station, including how to work together in confined quarters, was "critically important'' for future space travel plans.

"We work extremely well,'' she said of the international crews aboard the station.

Some "incredibly good friendships'' had been formed through that work .

The second stage involved deeper space flight, beyond the moon, in the 2020s. In the 2030s, it was planned to undertake a manned orbit of Mars, before returning to Earth.

By the end of the 2030s, it was planned to land on the Red Planet and undertake extensive exploration searching for signs of life.

This was "global exploration'' undertaken for mankind, and many benefits, including improved technology, would flow from humans learning more about their red "sister planet'', she said.

The expedition to Mars and the eventual landing there, would involve "rewriting all the science books in history'', she said.

Dr Newman took up her deputy administrator post last year, and in that role she provides overall leadership, planning, and policy direction for Nasa.

She was previously the Apollo programme professor of astronautics at the Massachusetts Institute of Technology in Cambridge, in the United States.

She helped develop a much less bulky, new generation spacesuit.

• Nasa plans a three-stage programme to land astronauts on Mars by 2039:

• The first stage, focusing on operating the International Space Station, will continue until 2024.

• The second stage includes deep space testing, beyond the moon, of the Orion space craft, in the 2020s.

• Third stage includes a manned trip to Mars in the 2030s, with an orbit of Mars and return to Earth; followed by a later flight with a landing, and extensive exploration on Mars, by 2039.