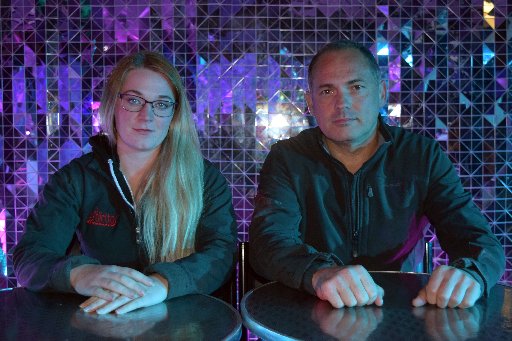 Stilettos Revue Bar and La Maison manager Tabitha Van Belle and owner Peter Cooper have experienced an increase in sex worker applicants during the pandemic. Photo: Shawn McAvinue
A Dunedin brothel and strip club is experiencing a spike in the number of women looking for work since Covid-19 closed the doors of both establishments, the owner says.

La Maison and Stilettos Revue Bar owner Peter Cooper said since the lockdown started, 10 women who had never worked in the industry before had contacted him asking for work.

For privacy reasons, he never asked potential sex workers what job they had previously worked in, he said.

Mr Cooper said he was confident the Dunedin brothel and strip club would be able to reopen when the city entered Alert Level 2.

He had secured the wage subsidy for his 10 staff, such as bartenders and a manager.

About 30 strippers and sex workers were also employed in the business as independent contractors and could apply for the subsidy themselves, he said.

The manager of the bar and brothel, Tabitha Van Belle, said the sex workers she managed had been in regular contact wanting reassurance “they had a job to come back to”.

A worrying trend since the nation entered lockdown was clients contacting sex workers directly to request a service.

All requests were declined, she said.

When the businesses reopened, she expected customers to respect new safety rules to avoid either establishment being closed for non-compliance.

The brothel was busy the weekend before the Level 4 lockdown, she said.

Dame Catherine, speaking to The Star from her home in Wellington, said she expected more people to become sex workers as a result of losing their jobs because of the economic impact of Covid-19.

“It’s one of those occupations people consider doing when they can’t make ends meet and can’t find other work.”

An increase in the number of sex workers would make it a tougher market because “there’s only a certain amount of existing clientele”.

In a recession, people would have less disposable income and would be less likely to spend on services.

She advised any sex workers struggling financially to contact the collective for advice on how to access income entitlements and “survive this really tough time”.