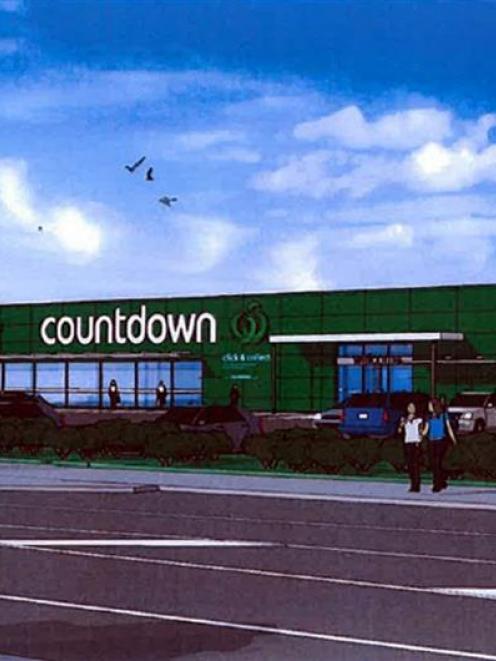 An artist’s impression of the proposed Countdown supermarket in Mosgiel. IMAGE: SUPPLIED
The Dunedin City Council and Progressive Enterprises have broken ground on a contentious Mosgiel supermarket proposal.

The parties reached an agreement on the proposed new Countdown after Environment Court mediation.

The council consented in October to the supermarket being built in residential-zoned land with conditions, but Countdown's parent company, Progressive Enterprises, appealed some of the conditions and the court sent the parties to mediation.

Both parties confirmed yesterday an agreement was reached and approved by the court. Neither party provided details of the agreement.

The Otago Daily Times understands Progressive Enterprises came to an agreement with the owners of neighbouring residential properties, allowing the consent to proceed.

Countdown did not provide a time frame for the construction of the supermarket, but it is understood it could be completed within 12 months.

Countdown property general manager Adrian Walker said the company was ‘‘really excited'' about the development and the jobs it would bring to the area.

‘‘We have been able to put the project out to tender and will make an announcement regarding construction time frames when that process is completed,'' he said.

When the proposed supermarket was announced in December 2014, Countdown said it would cost $15million, create 48 jobs and replace the chain's existing Factory Rd store.

Dunedin city councillor and hearing committee chairman Andrew Noone said yesterday the agreement was a ‘‘good resolution'' for both parties.

‘‘It's been pleasing that council and Progressive have been able to work through the issues that were at stake,'' he said.

‘‘It was good to get the resolution. It's a significant investment in the local community from Progressive and from a council point of view has positive effects.''

He would not discuss details of the agreement, but said the council had dropped one condition of consent which would have required a pedestrian pathway on the northern side of store to be covered.